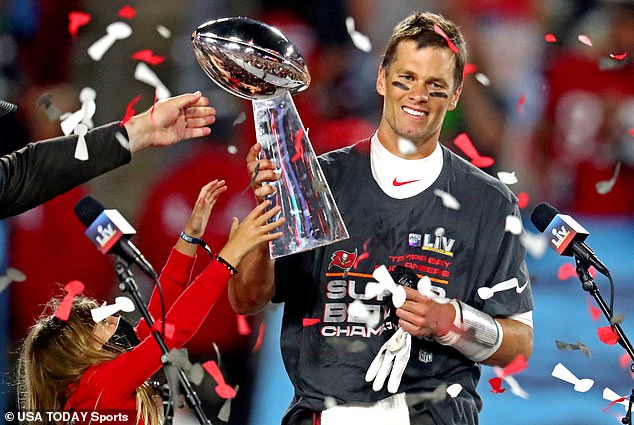 He wrote on Twitter Sunday: ‘These past two months I’ve realized my place is still on the field and not in the stands.’

‘That time will come. But it’s not now. I love my teammates, and I love my supportive family. They make it all possible. I’m coming back for my 23rd season in Tampa. Unfinished business LFG.’

Almost immediately afterwards, Brady was trending on social media – with some expressing their excitement that he would return to the field, while many others found it comical that he would ‘un-retire’ after spending just a few weeks alone with his family.

‘Damn, even Tom Brady saw 7.9% inflation and record-high gas prices and decided he needed to go back to work,’ tweeted Joe Pompliano, Founder of Huddle Up.

‘Tom Brady waking up and seeing nothing but another Parent-Teacher conference on the daily schedule,’ the Pat McAffee Show tweeted with a meme of The Office character Michael Scott shaking his head.

And Adam Wren, a national politics features reporter for Insider, joked that he is ‘un-retiring to spend less time with my family.’

Tom Brady (pictured after his Super Bowl win last year) has come out of retirement less than two months after quitting the NFL.

Others, like Rodger Sherman from The Ringer, posted memes of what it must have been like for Brady to spend time with his wife and three children over the past few weeks, while another posted a meme from Parks and Recreation featuring Adam Scott’s character.

In it, he tells his wife, the supermodel Gisele Bundchen, he’s coming home before saying: ‘So I tried domestic for 43 days. I don’t know how you people do it.’

Philip Lewis, the senior front page editor for the Huffington Post, also tweeted that ‘Tom Brady was a family man for like one month, and said no thanks.’ Eric Hubbs, the MLB editor for Barstool Sports wrote: ‘Five weeks was wayyyyy too much family time for Tom Brady.’

And Ryan Hecht, a marketing director from Colorado, also joked that Brady must have gotten into ‘one long conversation with his neighbor at the mailbox and unretired,’ while Flo Goodman wrote: ‘Aw, Tom Brady was just feeling a little self conscious, and wanted to hear all the good things people had to say about him before he renewed his contract.’

Several other Twitter users seemed to believe that Brady, 44, decided to come out of retirement after speaking to Manchester United soccer star Cristiano Ronaldo – himself a veteran sportsman widely regarded as still being at the top of his game.

Brady had watched the team beat Tottenham 3-2 on Saturday, with Ronaldo scoring a game-winning hat trick, which made him the all-time leading goalscorer in FIFA history.

‘Give thanks to Cristiano for this!’ a fan added. ‘Brady went to see him and at 37 Ronaldo scored a hat trick. After he and Brady talked and I’m sure he convinced him to come back.’

‘Tom Brady really came out of retirement after talking to Ronaldo,’ another said.

‘@Cristiano has that affect on people!’ comedian Conor Moore tweeted.

One fan wondered: ‘What did Ronaldo say to Brady??’

‘If Tom Brady went to watch [Argentine soccer player Lionel] Messi instead of Ronaldo he’d still be in retirement,’ another joked.

Both the Red Devils and the Tampa Bay Buccaneers are owned by the Glazer family, who Brady personally thanked in his retirement statement on February 1.

Over the course of the past few years, Brady led the Buccaneers to a Super Bowl title during the 2020 season and to the NFC South championship last season.

He had previously spent 20 seasons with the New England Patriots, winning six Super Bowl titles before moving to Florida.

Brady was thought to have ended that 22-year career on February 1, when he announced he was retiring.

He cited his desire to spend more time with Bundchen and his three children when he decided to walk away from the game.

‘I have always believed the sport of football is an ”all-in” proposition – if a 100% competitive commitment isn’t there, you won’t succeed, and success is what I love so much about our game,’ Brady wrote on February 1.

‘There is a physical, mental, and emotional challenge EVERY single day that has allowed me to maximize my highest potential. And I have tried my very best these past 22 years. There are no shortcuts to success on the field or in life.’

‘This is difficult for me to write, but here it goes: I am not going to make that competitive commitment anymore. I have loved my NFL career, and now it is time to focus my time and energy on other things that require my attention.’

He also thanked Bundchen and his children, saying they are his ‘inspiration’ and ‘greatest achievement.’

The quarterback then stunned the world on Sunday when he confirmed he would be re-joining the Buccaneers for another campaign after just 40 days in retirement.

However, his decision may not be that surprising considering just a week into his ‘retirement,’ Brady said ‘never say never’ about playing again.

Brady announced his decision to retire last month, citing the desire to spend more time with his wife, supermodel Gisele Bundchen, and three children. Brady posted the above photo to Instagram on Sunday when he announced his return to the game

Brady announced his decision to return to the Bucs one day before the NFL free agency period begins. He included this photo in his Instagram post announcing his return

Prior to the 2021-22 season, Brady signed a one-year, $25 million contract extension after guiding the Bucs to a Super Bowl win last year. That deal included a $20 million signing bonus, $15 million of which would have been paid to him in February.

The details of his deal for the 2022 season remain unclear.

But since being drafted by the New England Patriots in the sixth round of the 2000 NFL Draft, Brady has earned more than $292 million in salary over 22 seasons, according to Spotrac.

That does not include earnings from his fitness brand or his many endorsement deals with companies such as Subway and Under Armour, not to mention his recent foray into non-fungible tokens.

Brady signed a one-year, $25 million contract extension after guiding the Bucs to a Super Bowl win last year. That deal included a $20 million signing bonus, $15 million of which would have been paid to him in February. The details of his deal for the 2022 season remain unclear

Brady is now also set to act and produce in a football-themed road trip movie titled 80 For Brady,  The Hollywood Reporter revealed just weeks after he announced his retirement.

He was expected to join forces with several acting legends including Rita Moreno, Sally Field, Jane Fonda and Lily Tomlin for the project.

The foursome of Hollywood icons would be playing four best friends and New England Patriots fans who take a life-changing trip to the 2017 Super Bowl LI to see their sports hero Brady play.

The film was inspired by a true story and will follow the chaos that happens as a result of the trip as they try to navigate their way to the biggest sporting event in America.

Brady – who led the New England Patriots to a comeback victory over the Atlanta Falcons, 34-28 – was heavily involved with the inception of the project, developing it with Donna Gigliotti.

The film will be directed by Kyle Marvin, who also co-wrote the script with Michael Covino. It is set to be made by Paramount Pictures and Endeavor Content.