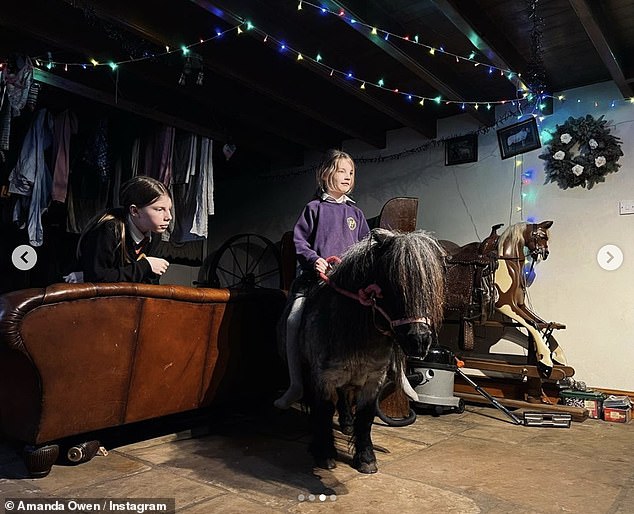 Our Yorkshire Farm star Amanda Owen has delighted fans with a series of sweet snaps of her daughters relaxing by the fire, with one perched on the back of her pony in the living room.

The 47-year-old shared a photo of her children, who she shares with husband Clive, 66, to Instagram on Saturday from Ravenseat Farm in Yorkshire.

Amanda, who has nine children, aged seven to 20, posted a snap of her daughter Annas, seven, riding ‘Tony the pony’ inside their home while her sisters, Violet, 10, Edith, 12, relaxed  on the couch.

The family’s laundry could be seen hanging up, prompting Amanda to joke: ;Drying washing by fire & a clothes horse.’

Yee-haw! Amanda, who has nine children, aged seven to 20, posted a snap of her daughter riding ‘Tony the pony’ inside their home

Our Yorkshire Farm star Amanda Owen shared a photo of her children, who she shares with husband Owen, 66, to Instagram on Saturday from Ravenseat Farm in Yorkshire. Pictured left to right: Annas, seven, Violet, 10, Edith, 12, Raven, 20, Amanda with Nancy, four, Clive with Clemmie, five, Reuben, 17, Miles, 14 and Sidney, eight

In another snap, the children chatted around the fire place in their school uniforms, and one of the girls propped her feet up on Ton’y back.

Amanda, who stars with her family in Channel 5 ‘s hit show Our Yorkshire Farm, opted not to post images of her husband Clive – who typically stays out of the spotlight more than his wife.

The couple found their marriage under the spotlight this autumn after neighbours claimed she and Clive, had been ‘living apart for months’.

At the time, Amanda remained tight-lipped, apart from releasing a joint statement with Clive in which they said they had ‘stresses and strains’ like any other marriage.

Chilled: The post shows Annas, seven, on the pony while Violet, 10, Edith, 12, relax on the couch

Wholesome: The families clothes hang over the fire to dry while one of the girls propped her feet up on Tony’s back as she read her book

But they added that they always wanted to ‘show the reality of life on the farm’ through their TV shows and book deals.

Speaking to the Yorkshire Post, Amanda said she doesn’t regret taking part in her BBC2 show, saying: ‘We are just a normal family dealing with everything life throws at us and the programme is life as it’s happening, whether there’s someone filming it or not and that’s what keeps everybody grounded.’

Fun: Annas rides the pony out of the sitting room and into another part of the house

She has previously spoken candidly on how ‘romance’ is not in her and Clive’s ‘make-up’ while revealing what she believes to be the secret to the pair’s 21-year marriage.

When asked if she and her husband are romantic, the shepherdess told OK! magazine: ‘I don’t think either of us are! I don’t think it’s in our make-up.’

‘Everything we do is interchangeable,’ she said. ‘Clive will serve afternoon tea and change nappies, I’ll shear sheep and shovel s**t. It doesn’t matter who does what, we’re all on the same side.’

Amanda praised Clive for being a ‘hands-on’ dad, adding that ‘at certain times of year, it’s all hands on deck and all tasks on the farm are interchangeable.