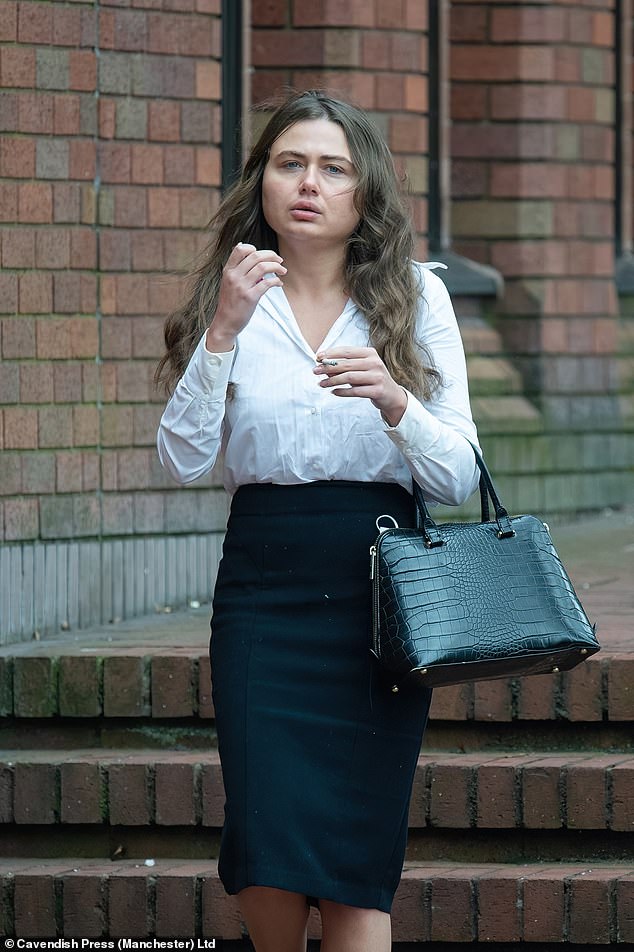 Drink-driving businesswoman, 27, caught twice the limit in her pink Fiat 500 claimed she was ‘fleeing a man who scared her as she ate a Big Mac’

A businesswoman caught driving while almost twice the alcohol limit claimed she had been trying to flee a mystery man who approached her car as she was eating a Big Mac.

Helena Monk, 27, had stopped in a side road near Altrincham to eat the burger despite having a meal and drinks with a friend the same evening, only to ‘panic when she saw a man walk towards her pink Fiat 500.’

She told magistrates she drove back onto a country road to get away from him, where police spotted her swerving around the road with an internal light still switched on inside her vehicle.

Monk, who lives in an apartment worth £560,000, had initially applied for a ‘special reasons’ hearing in which drink drivers cite ‘exceptional hardship’ in an attempt to dodge a road ban.

Helena Monk (pictured outside Stockport Magistrates’ Court) , 27, was caught driving whilst almost twice the alcohol limit, claiming she had been trying to flee a man who approached her car whilst she was eating a Big Mac

The recruitment agent (pictured), who was seen swerving side to side as she drove, did not believe she was over the limit

At Stockport magistrates court, Monk who lives in Hale, Near Altrincham, Greater Manchester, admitted drink driving and was banned from driving for 18 months.

Tests showed she had 69 micrograms of alcohol in 100 millilitres of breath, the legal limit is 35mg.

It was claimed Monk who works a textile designer and a recruitment agent had been out for a meal and had dropped off her friend but stopped at McDonalds on her way home – then pulled over at the Bulls Head pub to eat it before setting off again.

Prosecutor Peter Conroy said a police constable noticed Monk swerving from side to side in the road and an internal light on in the car.

He said: ‘The defendant pulled over and he could smell alcohol on her breath and could tell she was intoxicated. She then failed a road side breath test and was arrested being taken to Middlewich custody suite. She was compliant with police throughout. There were no other passengers in the car and conditions were good, it was late at night.’

Monk dropped her friend off home after their meal but then had another drink whilst there, which she believes pushed her over the limit (pictured Stockport Magistrates’ Court)

In mitigation defence lawyer James Street who specialises in ‘exceptional hardship’ cases said: ‘My client was someone of previous good character and she has now lost that. She accepts she will now be disqualified and it will have a significant impact on her in terms of circumstances.

‘This was some time ago in the summer last year. She had been out with a friend and had driven to have food and a drink. She did not believe she was over the legal limit, but she accepts the reading.

‘She had been out for a meal and a drink and then dropped her friend off at their home, where she has had another drink. It is probably that drink which has put her over the legal limit.

‘She was hungry later on and drove to McDonald’s to get a burger. She then started to drive off and realised it may be difficult to eat a burger whilst driving. She pulls over near the Bulls Head pub, 60 metres or so from where police sighted her.

‘She parked down the side lane of the pub and noticed someone approaching behind her. She was a single woman in a car and was concerned. She felt threatened because a male was behind her, so she took the decision to drive off onto the main road and that is when the police saw her and she pulled into a side road and co-operated.

‘There was a reason as to why she was driving on that particular occasion but it was understandably a silly decision to drive and she will be punished for it.

‘She is going to be much more limited in her ability now to find work after losing her license because of this.

‘She has a small amount of savings from a previous job and has £200 available. She had not been involved in benefits before. I do not know if she is receiving any other support from family members. She is sorry for the judgement she made.’