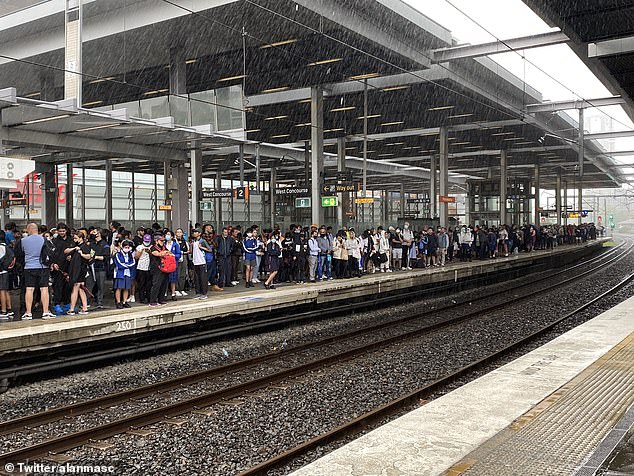 Sydney commuters could receive free train travel on a Friday for a year as part of a deal with union officials to stop more industrial action, the NSW transport minister has suggested.

The Rail, Tram and Bus Union on Tuesday said it wanted the state government to offer ‘fare free Fridays’ every week until June to breathe life into the Sydney CBD.

‘If they don’t do that we’re going to take industrial action that will force them to,’ NSW Rail, Tram and Bus Union secretary Alex Claassens said.

NSW Transport Minister David Elliott said the government was willing to offer that incentive for a year in return for the rail union promising not to strike for at least 12 months.

The threat comes as both the RTBU and the Electrical slow or refuse to carry out critical maintenance on the Sydney Trains network after last week’s storm damage.

Pictured: Commuters on a Parramatta, Sydney train platform last week as flooding left schedule boards blank and caused long delays.  Sydney commuters could soon receive free train travel on a Friday for a year as part of a deal with union officials to stop industrial action

Commuters have been told to expect delays or service cancellations this week, with some trains told to slow down and travel at speeds no faster than 40kmph.

The Electrical Trades Union has notified Sydney Trains it will be slowing critical maintenance and repair work.

Certain maintenance jobs will be off-limits for workers. The RTBU has also refused to do the work in solidarity.

While it’s not expected to cause immediate disruption, there are warnings it could bring delays to the network if action is prolonged.

‘There will be a point where equipment, such as substations, overhead wiring and track points cannot continue to be used if those maintenance activities have not been performed,’ he told Daily Telegraph.

‘If the bans continue indefinitely, this could progressively result in safety issues on the rail network and growing portions of the network unable to be operated.’

Sydney commuters are being told to expect more delays and gaps in service and cancellations (pictured, large crowds formed at Erskineville on Saturday)

Transport Minister David Elliott said discussions between industry groups was ongoing (pictured, crowd of commuters waiting for a train over the weekend)

‘At this time we are not expecting any service impacts for our customers next week.’

‘I will continue to meet with (the ETU) but I can’t help being suspicious about the motives as we approach two elections,’ he said.

Unprecedented rainfall in the Harbour City sparked major delays while flooding on the tracks prompted some trains to travel slower than normal.

The NSW Government said flooding, landslide and trees on tracks were the main contributors to the delays.