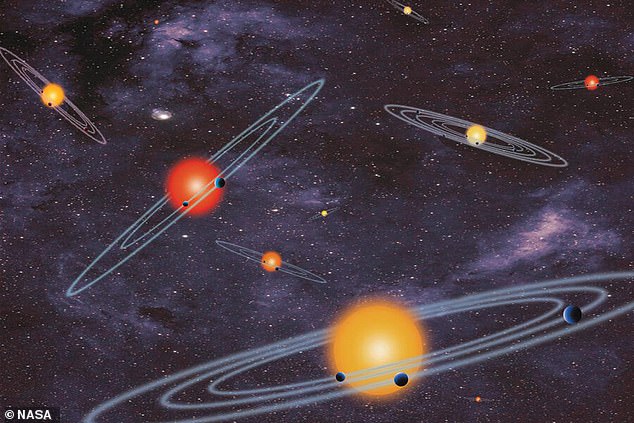 It has been 30 years since the first planet beyond the solar system was discovered, and to date more than 5,000 have been found – but are they all alien worlds?

Scientists have been examining the thousands of exoplanet discoveries confirmed within the Milky Way Galaxy, and three of them have turned out to be stars.

A team from the Massachusetts Institute of Technology in Cambridge, looked through planets discovered using the NASA Kepler Space Telescope, double checking the measurements to see which match known planet sizes.

They identified three objects that are simply too big to be planets, based on new, more accurate measurements taken by the European Space Agency Gaia telescope.

They found that the three objects, which are known as Kepler-854b, Kepler-840b, and Kepler-699b, are now estimated to be between twice and three times Jupiter’s radius – for comparison a brown dwarf star is roughly the radius of Jupiter.

These objects also have 200-300 times more mass than Jupiter, and with the larger radius and mass combined, it means they are well beyond ‘planetary boundaries’.

It has been 30 years since the first planet beyond the solar system was discovered, and to date more than 5,000 have been found – but are they all alien worlds?

Artist impression of Kepler-854 b. Based on original measurements, it was thought this was a very large planet. New research shows it is a dwarf star, at three times Jupiter radius

A fourth planet, known as Kepler-747b, was found to be about 1.8 times Jupiter’s radius, which is comparable to the very largest confirmed planets, but also larger than many brown dwarf stars.

This means that it sits between a star and a planet – although it is relatively far from its star, so the amount of reach it receives is too small to sustain a planet this size.

The team behind the study came to the conclusion that while Kepler-747b’s planetary status is suspect, it is not entirely implausible it is an alien world.

‘Most exoplanets are Jupiter-sized or much smaller. Twice [the size of] Jupiter is already suspicious. Larger than that cannot be a planet, which is what we found,’ says the study’s first author Prajwal Niraula from MIT.

Rooting out planetary imposters was not the team’s initial goal. Niraula originally intended to look for systems with signs of tidal distortion.

‘If you have two objects close to each other, the gravitational pull of one will cause the other to be egg-shaped, or ellipsoidal, which gives you an idea of how massive the companion is,’ Niraula explains.

They found that the three objects, which are known as Kepler-854b, Kepler-840b, and Kepler-699b, are now estimated to be between twice and three times Jupiter’s radius – for comparison a brown dwarf star is roughly the radius of Jupiter

‘So you could determine whether it’s a star-star or star-planet system, just based on that tidal pull.’

STARS: THE MOST RECOGNIZABLE ASTRONOMICAL OBJECTS

Stars are the most widely recognized astronomical objects, and represent the most fundamental building blocks of galaxies, NASA explained.

The age, distribution, and composition of the stars in a galaxy trace the history, dynamics, and evolution of that galaxy.

Stars are also responsible for the manufacture and distribution of heavy elements such as carbon, nitrogen, and oxygen.

Their characteristics are intimately tied to those of the planetary systems that may coalesce about them.

They range in size from a small city, to one covering half the solar system.

The smallest stars – neutron stars – pack a lot of mass into a small object.

They contain twice the mass of the sun, but are just 30 miles wide.

White dwarf stars are a bit bigger – often similar in size to our planet Earth, but again, with the mass of the sun.

The largest supergiant stars can be more than 1500 times larger than our Su, over 2,000 million miles across.

‘People rely on this list to study the population of planets as a whole. If you use a sample with a few interlopers, your results may be inaccurate. So, it’s important that the list of planets is not contaminated.’

The research also helps further pin down the upper and lower boundaries for what is a planet – helping create a fuller image of the concept of an alien world.

When combing through the Kepler catalog, the team came upon a signal from Kepler-854b that appeared too large to be true.

‘Suddenly we had a system where we saw this ellipsoidal signal which was huge, and pretty immediately we knew this could not be from a planet,’ Shporer says. ‘Then we thought, something doesn’t add up.’

The team then took a second look at both the star and the planetary candidate.

As with all Kepler-detected planets, Kepler-854b was spotted through a transit detection – a periodic dip in starlight that signals a possible planet passing in front of its star.

The depth of that dip represents the ratio between the size of the planet and that of its star. Astronomers can calculate the planet’s size based on what they know of the star’s size.

But as Kepler-854b was discovered in 2016, its size was based on stellar estimates that were less precise than they are today, the team explained.

This was before large datasets were released by the European Space Agency Gaia mission, a space based observatory that is precisely measuring and mapping the properties and paths of all the stars it can see in the Milky Way galaxy.

In 2016, Gaia’s measurements of Kepler-854 were not yet available. Given the stellar information that was available, the object seemed to be a plausible-sized planet.

But Niraula found that with Gaia’s improved estimates, Kepler-854b turned out to be much larger, at three times the radius of Jupiter and over 200 times its mass.

‘There’s no way the universe can make a planet of that size,’ Shporer says. ‘It just doesn’t exist.’ That is the minimum size for a star.

Artist impression of Kepler-699 b. These objects also have 200-300 times more mass than Jupiter, and with the larger radius and mass combined, it means they are well beyond ‘planetary boundaries’

For comparison, Brown dwarfs, failed stars, are objects with masses 13–80 times that of Jupiter, but roughly the same radius – between 0.7 and 1.4 times Jupiter.

However, these are still small companion dwarf stars, as most are two the three times the radius of Jupiter, where Jupiter is only a tenth the radius of our sun.

The team confirmed that Kepler-854b was a planetary ‘false positive’ – that is an object that is not a planet at all, but instead, a small star orbiting a larger host star.

Niraula then searched through the Kepler catalog’s more than 2,000 planets, this time for significant updates to the size of stars provided by Gaia.

He ultimately discovered three stars whose sizes significantly changed based on Gaia’s improved measurements – all bigger than first thought.

Kepler-840 b artist impression from NASA. They don’t expect there to be many more corrections to existing exoplanet catalogs, and even this was only a tiny correction – with just three out of thousands

From these estimates, the team recalculated the size of the planets orbiting each star, and found them to be about two to four times Jupiter’s size.

‘That was a very big flag,’ Niraula says. ‘We now have three objects that are now not planets, and the fourth is likely not a planet.’

They don’t expect there to be many more corrections to existing exoplanet catalogs, and even this was only a tiny correction – with just three out of thousands.

‘This is a tiny correction,’ Shporer says. ‘It comes from the better understanding of stars, which is only improving all the time.

‘So, the chances of a star’s radius being so incorrect are much smaller. These misclassifications are not going to happen many times more.’

In the case of these three, and possibly four objects, it means they are a binary system – but the secondary star is tiny, and so is in orbit around its host.

The findings have been published in the Astronomical Journal.

WHAT IS THE KEPLER TELESCOPE?

The Kepler mission has spotted thousands of exoplanets since 2014, with 30 planets less than twice the size of Earth now known to orbit within the habitable zones of their stars.

Launched from Cape Canaveral on March 7th 2009, the Kepler telescope has helped in the search for planets outside of the solar system.

It captured its last ever image on September 25 2018 and ran out of fuel five days later.

In total, Kepler has found around 5,000 unconfirmed ‘candidate’ exoplanets, with a further 2,500 ‘confirmed’ exoplanets that scientists have since shown to be real.

Kepler is currently on the ‘K2’ mission to discover more exoplanets.

These wheels control direction and altitude of the spacecraft and help point it in the right direction.

While the planet has found thousands of exoplanets during its eight-year mission, five in particular have stuck out.

Kepler-452b, dubbed ‘Earth 2.0’, shares many characteristics with our planet despite sitting 1,400 light years away. It was found by Nasa’s Kepler telescope in 2014

In 2014 the telescope made one of its biggest discoveries when it spotted exoplanet Kepler-452b, dubbed ‘Earth 2.0’.

The object shares many characteristics with our planet despite sitting 1,400 light years away.

It has a similar size orbit to Earth, receives roughly the same amount of sun light and has same length of year.

Experts still aren’t sure whether the planet hosts life, but say if plants were transferred there, they would likely survive.

Kepler found a planet that orbits two stars, known as a binary star system, in 2011.

The system, known as Kepler-16b, is roughly 200 light years from Earth.

3) Finding the first habitable planet outside of the solar system

Scientists found Kepler-22b in 2011, the first habitable planet found by astronomers outside of the solar system.

The habitable super-Earth appears to be a large, rocky planet with a surface temperature of about 72°F (22°C), similar to a spring day on Earth.

The telescope found its first ‘super-Earth’ in April 2017, a huge planet called LHS 1140b.

It orbits a red dwarf star around 40 million light years away, and scientists think it holds giant oceans of magma.

The Trappist-1 star system, which hosts a record seven Earth-like planets, was one of the biggest discoveries of 2017.

Each of the planets, which orbit a dwarf star just 39 million light years, likely holds water at its surface.

Three of the planets have such good conditions that scientists say life may have already evolved on them.

Kepler spotted the system in 2016, but scientists revealed the discovery in a series of papers released in February this year.

How does Kepler discover planets?

The telescope has an incredibly sensitive instrument known as a photometer that detects the slightest changes in light emitted from stars.

It tracks 100,000 stars simultaneously, looking for telltale drops in light intensity that indicate an orbiting planet passing between the satellite and its distant target.

When a planet passes in front of a star as viewed from Earth, the event is called a ‘transit’.

Tiny dips in the brightness of a star during a transit can help scientists determine the orbit and size of the planet, as well as the size of the star.

Based on these calculations, scientists can determine whether the planet sits in the star’s ‘habitable zone’, and therefore whether it might host the conditions for alien life to grow.

Kepler was the first spacecraft to survey the planets in our own galaxy, and over the years its observations confirmed the existence of more than 2,600 exoplanets – many of which could be key targets in the search for alien life