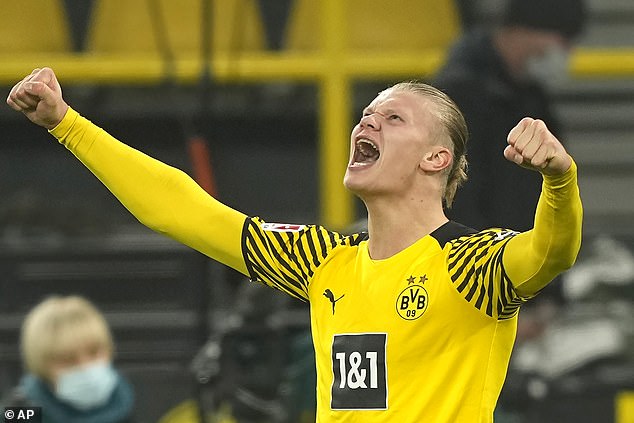 Borussia Dortmund advisor ‘passed out’ when he heard about the money involved in Erling Haaland’s potential transfer to Manchester City who are ready to make the striker the highest paid player in the Premier League with £500,000-a-week wages

Borussia Dortmund advisor Matthias Sammer joked that he ‘passed out’ when he heard about the money involved in Erling Haaland’s potential transfer to Manchester City.

Sportsmail revealed last week that Pep Guardiola’s side are the frontrunners to sign the Norwegian striker in the summer in a deal that is likely to be worth nearly £100million.

Haaland has a £63million release clause, while there would also be a signing-on bonus and a substantial payment to his agent Mino Raiola.

In addition, Manchester City are ready to make the 21-year-old the highest paid player in the Premier League with wages of £500,000 per week.

Speaking about a potential deal on Amazon Prime, Sammer said: ‘I didn’t hear anything today, yesterday, the day before yesterday.

‘I know City is after him. The numbers – I had whiplash! I passed out. My wife picked me up again. Accordingly, it is possible.’

Sammer, who was sporting director at Bayern Munich during Pep Guardiola’s time at the club, revealed he would like to see Haaland play under the Spanish boss.

‘I’m very excited to see how the Guardiola-Haaland combination will work if it comes to that,’ he said.

‘They will both benefit from each other. Because Pep, of course – I was able to experience him for three years – has a certain idea. I can also imagine dealing with a centre-forward, no question. But he will also have to learn from the centre-forward.’

Barcelona and Paris Saint-Germain are also showing interest in Haaland, but City’s most significant rival for his signature is Real Madrid.