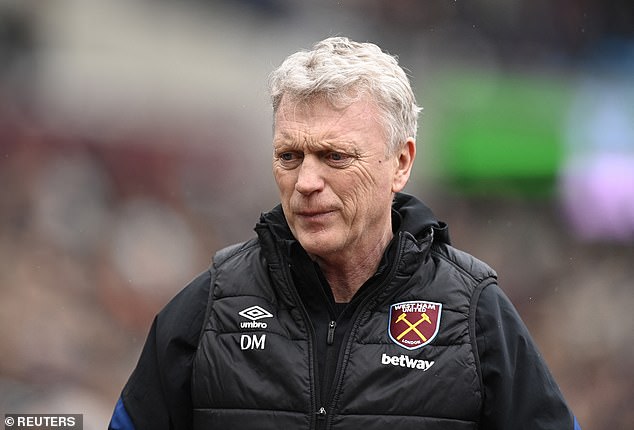 The first leg finished 1-0 to the Spanish side and West Ham, who are without Jarrod Bowen and likely to be missing Michail Antonio, must score to avoid an exit.

Atletico Madrid did a number on Manchester United in the Champions League on Tuesday as they bought free-kicks and milked injuries.

But Moyes wants to show that an English side can win fair and square.

The Hammers manager said: ‘This is a gentlemen’s sport. In some way we’re all desperate to win and we’d kick your granny, if you know what I mean, to get a result.

‘But in the same breath, you want to win in a fair and correct fashion.’

Ukrainian Andriy Yarmolenko could start for West Ham, with Bowen out until after the international break and Antonio fighting for fitness.

He trained away from the main group on Wednesday, along with Aaron Cresswell. The London Stadium needs to be as alive as it has ever been on Thursday.

‘We’re going to play against a side that will make it difficult, maybe disrupt the game at times and play a different way,’ Moyes said. ‘So we’re going to need the crowd to see that as well.

‘The London Stadium for really special games — Liverpool, Chelsea — we’ve had fabulous atmospheres. I’d expect this to be right up there.’