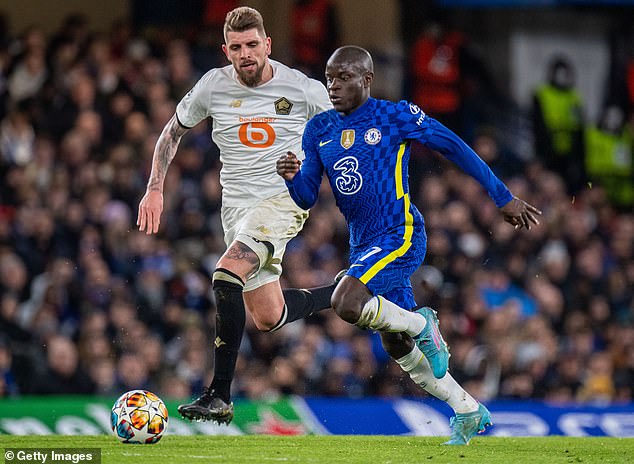 Chelsea ARE free to play their Champions League away at Lille despite Roman Abramovich being added to the EU’s sanction ‘black list’, with UEFA still expecting tonight’s last-16 second leg to go ahead in France

Chelsea have been cleared to play the second leg of their Champions League last-16 tie against Lille, despite owner Roman Abramovich being added to the European Union’s sanction ‘black list’ on Tuesday.

Fears had grown in France that Wednesday’s Champions League clash would not be able to go ahead after the EU followed the UK Government in sanctioning Chelsea’s Russian owner due to his links to Vladimir Putin.

After Abramovich’s British assets were frozen last week, placing Chelsea under a transfer embargo and preventing them from selling tickets and merchandise amongst other prohibitions, the club were issued a special Government licence to continue football operations in the UK.

Reports in France suggested they would need a similar licence to face Lille at the Stade Pierre Mauroy, but a UEFA official has told i that the EU will be following the UK’s sanctions, meaning they are still able to compete in the Champions League.

‘Our understanding is that the present case is assessed in the context of the licence issued in the UK which allows Chelsea FC to continue minimum football activity whilst providing a safeguard that no financial gain will result for Mr Abramovich,’ the spokesperson said.

‘We will work with the EU and relevant member states to ensure we have full clarity and remain in lockstep with all relevant and applicable measures in line with latest developments.’

They then added: ‘As it stands the match is taking place as scheduled.’

Chelsea hold a 2-0 lead heading into their second leg against Lille and are heavily fancied to progress to the quarter-finals of the competition.

Thomas Tuchel’s side have been able to travel to France for Wednesday’s match by plane as usual, despite the Government’s sanctions forbidding them from spending over £20,000 on travel.

The Blues had already made their travel arrangements before sanctions were placed on Abramovich, meaning they were allowed to continue with those plans this week.

Nevertheless, they will not be afforded a similar luxury when they make the trip to Middlesbrough for their FA Cup quarter-final at the Riverside Stadium on Saturday.

Having not yet sorted out their travel plans, Chelsea players face having to embark on a 10-hour round-trip coach journey to Teesside this weekend.

There will also only be around 600 away supporters at Saturday’s game after the west London club failed to amend their Government licence in time to sell more tickets.

After coming unstuck in their bid to tweak the licence, Chelsea issued a controversial statement on Tuesday requesting for the tie to be played behind closed doors at the Riverside – despite the hosts selling out their full allocation.

Boro chairman Steve Gibson was one of many to slam the Blues over their request, branding them ‘rotten’ and calling for the departure of counterpart Bruce Buck.

In the end Chelsea were forced to perform a humiliating U-turn when even their own Supporters’ Trust lamented the statement, withdrawing their request later that evening.