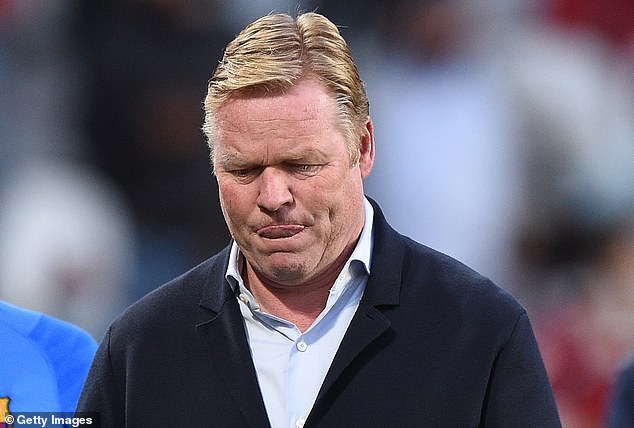 ‘That hurt me’: Ronald Koeman opens up on his humiliation after his brutal Barcelona exit with Joan Laporta sacking him on the plane after their defeat to Rayo Vallecano while ‘players were sitting behind us’

Ronald Koeman has shared the brutal details of how he was sacked by Barcelona earlier in the season.

The Dutchman was relieved of his duties by the Catalan club at the end of October following a 1-0 defeat away at Rayo Vallecano in LaLiga.

The result left Barca ninth in the table, while they had also lost two of their first three Champions League fixtures of the campaign.

Speaking on Dutch TV show Hoge Bomen (via Diario AS), Koeman revealed how he found out about his sacking from club president Joan Laporta in earshot of the squad.

‘How did Laporta fire me?’ he said. ‘On the plane. One thing that hurt me was that the players were sitting behind us, while I had to go sit next to him. He always says it, that I am a club legend. Prove it then!’

Koeman, who won four La Liga titles with Barcelona as a player, had been appointed in August 2020 by previous club president Josep Maria Bartomeu.

The ex-Everton boss suggested that he never felt comfortable under Laporta, who took over as president 12 months ago.

‘I immediately understood that I was not Laporta’s coach,’ Koeman said. ‘He didn’t choose me. They didn’t give me the same time that they are giving Xavi.

‘Then he told me a thousand times that he would never choose him because he lacked experience. However, I am happy that the team is better now.’

Barcelona have lost just once in 15 league games under new boss Xavi and have risen to third in the table following six wins in seven matches.

Boosted by January arrivals Ferran Torres, Dani Alves, Adama Traore and Pierre-Emerick Aubameyang, Barca are back in the mix for a Champions League spot and have progressed to the last 16 of the Europa League.