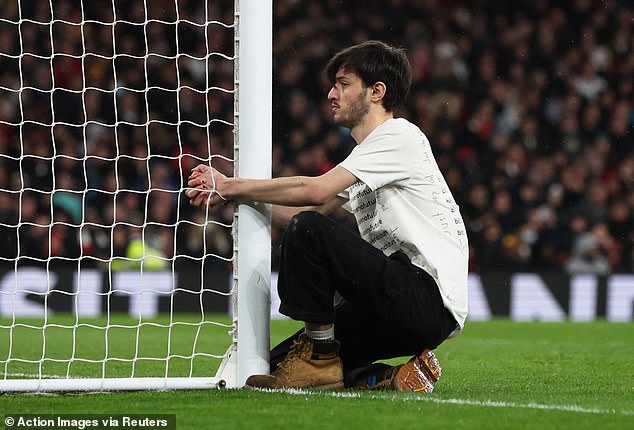 Arsenal’s game against Liverpool on Wednesday evening had to be temporarily halted following the bizarre antics of a pitch invader.

As the ball went out of play in the 60th minute at the Emirates Stadium, a man was seen running onto the hallowed turf after evading security.

However, while most pitch invaders have no idea what to do when they make it onto the grass, this individual had a clear target in mind.

The man ran over to Alisson’s goal and appeared to try to handcuff himself to one of the posts, leaving the Reds goalkeeper perplexed.

The shot-stopper tried to get the attention of referee Andre Marriner, while Sky Sports commentary pair Martin Tyler and Gary Neville were mystified as to what was happening.

Stewards managed to get to the trespasser and he was swiftly escorted from the pitch despite some struggle.

The peculiar moment came in between Liverpool’s two goals as they emerged 2-0 winners at the Emirates Stadium.

Diogo Jota beat Aaron Ramsdale at his near post to open the scoring, before Roberto Firmino flicked the ball home from Andy Robertson’s cross.

The Reds have now won nine Premier League matches in a row and have moved to within a point of leaders Manchester City.