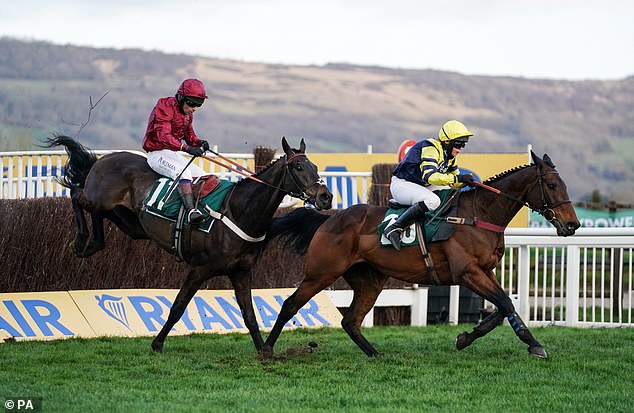 A 40-1 shot for the three-mile-two-furlong affair, the gelding picked up momentum turning for home after jumping well throughout and outstayed Nicky Henderson’s joint-favourite Mister Coffey and stablemate Didero Vallis to prevail by two and a half lengths.

The victory illustrates the steep ascent of the Williams’ 10-year-old, who was carrying a 5lb penalty after winning three times this term in far less exalted company.

‘That was such a thrill, I’m so pleased for David (Shaw, co-owner) because he’s been so patient with this horse,’ the trainer said.

‘At the ripe old age of 10, he’s finally shown the form we thought we might have, we’re thrilled.’

Of the third-placed horse, Williams added: ‘I’m delighted for the guys with Didero Vallis as well because he’s not been putting his best foot forward.

‘If you’re going to put blinkers on, you do wait for the Cheltenham Festival. Didero ran in the Grand Military the other day and didn’t go a yard, he was having a laugh!’