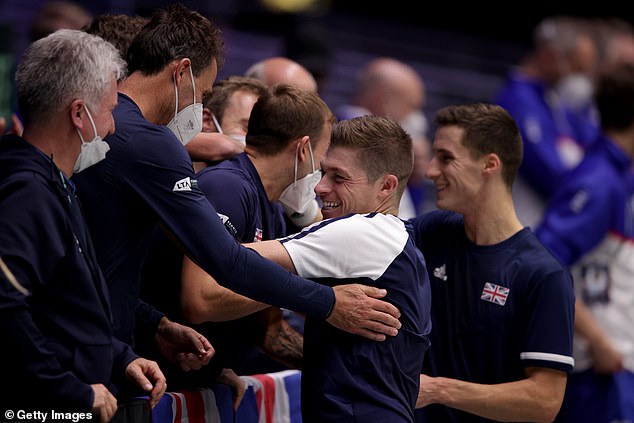 By Mike Dickson for MailOnline

Britain’s Davis Cup team will be back playing at home after a successful bid to host the competition’s new group stages.

Leon Smith’s squad will be one of four nations playing at Glasgow’s Emirates Arena between September 14 and 18 in its attempt to reach the final eight.

The Lawn Tennis Association joined Spain, Germany and Italy as winning bidders to provide a venue for the event, which is expected to lead to a finals week in Abu Dhabi in late November.

It is a five year deal, and while Glasgow will be the initial host it is expected to go to different venues around the UK after this edition.

Glasgow became a popular venue for international tennis in the last decade, when Andy Murray was helping GB become Davis Cup champions in 2015. The LTA has also expressed an interest in hosting the women’s equivalent, the Billie Jean King Cup.

LTA chief executive Scott Lloyd said: ‘This is brilliant news for British tennis fans and we are thrilled to be bringing the excitement of the Davis Cup back home in 2022.

‘Over the years we have seen exactly how much this competition has meant to both players and supporters, and it plays a big part in our ambition to stage more events around Great Britain, enabling us to open up tennis to more people.

‘We are keen to bring other events to this country and remain in the running to host the Billie Jean King Cup finals later this year.

‘Glasgow has been home to some fantastic ties in the past, including our victories over the USA and Australia in 2015, and it’s great to know that we’ll have such a knowledgeable and supportive crowd cheering our team on.’

Smith, Davis Cup captain and LTA head of men’s tennis added: ‘I’m absolutely thrilled that we will be hosting our group stages in Glasgow.

‘We as a team and our fans experienced some of our best moments of Davis Cup in Glasgow and I know how much the players will enjoy the atmosphere of the British fans once again on home soil.’

September is set to be a bumper month for tennis, starting with the US Open and then having the Europe v Rest of the World Laver Cup event coming to London at the end of it.