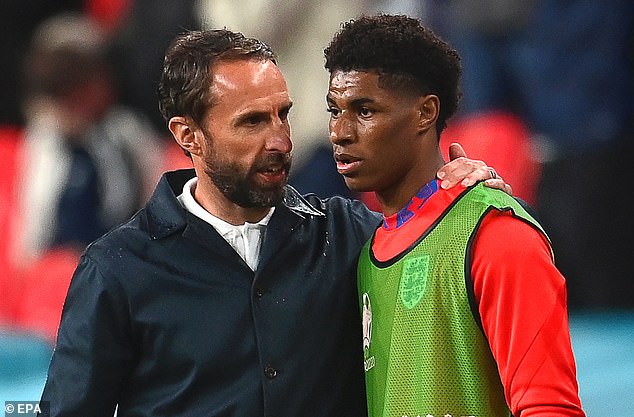 Gareth Southgate will hold heart-to-heart talks with Marcus Rashford after axing the Manchester United star from his England squad on Thursday.

The out-of-form forward was the big-name omission from the 25-man party for the Wembley friendlies against Switzerland tomorrow week and Ivory Coast three days later. But there was a first call-up for Crystal Palace defender Marc Guehi, whose team-mate Tyrick Mitchell could join the party next week.

Jadon Sancho and Kyle Walker were other high-profile casualties, although Southgate said that Walker’s omission was pre-agreed with the player and he will return for the summer internationals.

Ben White was rewarded for his excellent form at Arsenal with a recall to the senior set-up but it was Rashford’s non-inclusion that provided the biggest shockwaves.

‘It is a difficult time for him and he is clearly not at his best,’ said Southgate. ‘I think it is important, perhaps after this camp, for me to go and sit with him and find out a bit more what is going on.

‘I have spoken with him. I think he understands where he’s at. He’s very honest in his appraisal of everything.’

As revealed by Sportsmail on Wednesday, 21-year-old central defender Guehi was handed his first call-up. Southgate said: ‘With Marc, he has had a really consistent season.

‘I have been impressed with him on and off the ball, in the biggest games he has been very calm.’

Southgate said Jarrod Bowen, Max Kilman, Jacob Ramsey and Curtis Jones were among the players pushing for senior call-ups, with Mitchell on standby should any defenders withdraw.

‘We’ve been really impressed with Tyrick, he’s very close,’ said Southgate. ‘So who knows? We could have changes over the weekend and he’s one who is in our thoughts.’

Meanwhile, England are in danger of losing Fulham wonderkid Fabio Carvalho to Portugal. The talented 19-year-old, who has played extensively for England juniors, was selected by Portugal Under 21s yesterday.

Southgate explained Carvalho could not be chosen because he does not hold an English passport. He also confirmed Sportsmail’s story that the FA are trying to persuade Crystal Palace and France Under 21 forward Michael Olise to play for England.