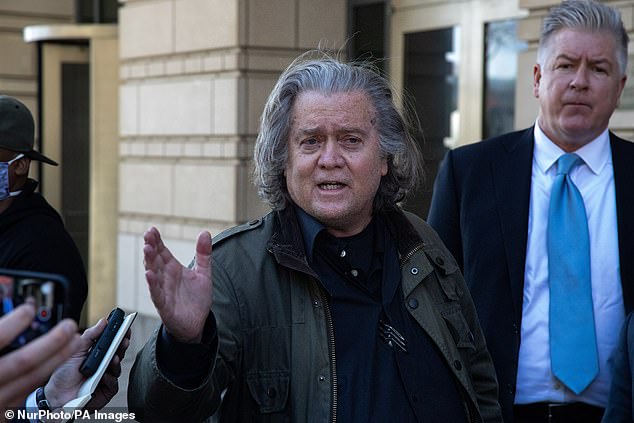 Federal prosecutors targeting Steve Bannon for contempt of Congress admitted Wednesday that they did not seek higher approval within the Justice Department before spying on Steve Bannon’s lawyer.

A federal judge on Wednesday ordered the Justice Department to produce internal records related to their decision to prosecute Bannon, a win for the former Trump adviser.

Nichols also said that Bannon’s team should be offered Justice Department ‘statements or writings’ that justify the decision to charge him with contempt of Congress given the long-standing precedent of former presidential advisers being immune to subpoenas.

Amanda Vaughn, the lead prosecutor on the case, told the court that her team ‘never sought content of any communications,’ instead the DOJ sought ‘toll records,’ to see who Costello was calling or writing and when.

Vaughn did not explicitly state why the Justice Department made the move which could violate attorney client privilege protections, but hinted that they wanted to make sure Bannon was relying on the advice of his lawyer when he refused to testify before the Jan. 6 committee in October.

Banno’s lawyers asserted that he did not meet the definition of ‘willful’ contempt because he was relying on the advice of their advice, but Nichols didn’t seem to buy that argument anyways.

Published opinions by the White House Office of Legal Counsel  (OLC) say that senior presidential advisers are ‘absolutely immune’ from compelled congressional testimony, which is why Bannon’s lawyers say they advised their client not to testify. But prosecutors argued that the OLC opinions, which don’t carry any legal weight, were not relevant to the contempt-of-congress charges.

Documents the DOJ provides could shed light on what justification they used for going against the executive branch’s own guidance, or what nonpublic legal guidance they used for prosecuting Bannon for defying the subpoena.

Bannon told reporters his case has ‘nothing to do’ with Jan. 6 and his focus is on taking down President Biden

‘What is essential to my work is taking down the illegitimate regime of the Biden administration and I do it every day,’ the former White House chief strategist told reporters outside the Washington, D.C. courthouse on Wednesday

Nichols, a Trump appointee, noted the dichotomy between the department’s internal policy and its prosecutorial decisions. ‘Those two positions would be held at the same time,’ he said.

Prosecutors in court admitted that they went to telecoms companies to demand Costello’s records, which does not require getting upper-level approval from within DOJ, instead of asking Costello himself for them, which would require more DOJ scrutiny.

Bannon’s other lawyers, Evan Corcoran and David Schoen, were appalled.

‘That… is absurd on its face. There is a special relationship between an attorney and their client,’ Schoen told the judge. ‘Hopefully the inspector general sees things differently.’

‘What on Earth were they going to tell from the records? They knew he was communicating [with Bannon,]’ Schoen added. ‘I think what happened is outrageous.’

The judge said he would understood that the Bannon team may push for investigators to be reprimanded or the move to be referred to a watchdog agency, but held back for now.

‘The behavior of the FBI and, quite frankly, DOJ has been outrageous to my attorney and the attorney-client privilege,’ Bannon said outside the courtroom Wednesday afternoon.

The government gained access to lawyer Robert Costello’s phone and email records, according to information in a new court filing

Meanwhile Bannon said his case has ‘nothing to do’ with Jan. 6 and his focus is on taking down President Biden.

‘What is essential to my work is taking down the illegitimate regime of the Biden administration and I do it every day,’ the former White House chief strategist told reporters outside the Washington, D.C. courthouse on Wednesday. ‘I do not consider them legitimate. I’ve stated this many times. I think the election on November 3rd was stolen and I’ve gone at publicly day after day after day.’

In November, Bannon pleaded ‘not guilty’ to the contempt charge and vowed to make the case a ‘misdemeanor from hell for Merrick Garland, Nancy Pelosi, and Joe Biden.’

The case took a shocking turn when Bannon’s lawyers revealed in February that the FBI had secretly spied on Bannon’s attorney, believing they had found a way to blow up the case.

The lawyers said in the explosive new filing they learned of the efforts to get Costello’s phone and email records when the government produced 790 documents as part of the case against Bannon, part of the normal document production in a criminal case.

The snooping, in the form of a grand jury subpoena, happened at a time when Costello was meeting with prosecutors ‘as Mr. Bannon’s attorney, in what he thought were good-faith pre-indictment discussions’ – and without indication of any ‘taint team’ to vet sensitive information.

Bannon’s lawyers blasted the information-gathering effort as ‘outrageous and inappropriate Government conduct,’ and demanded the feds provide further information – including sharing the subpoena used to obtain the information, and revealing who at the main Justice Department signed off on the effort, which apparently no one did.