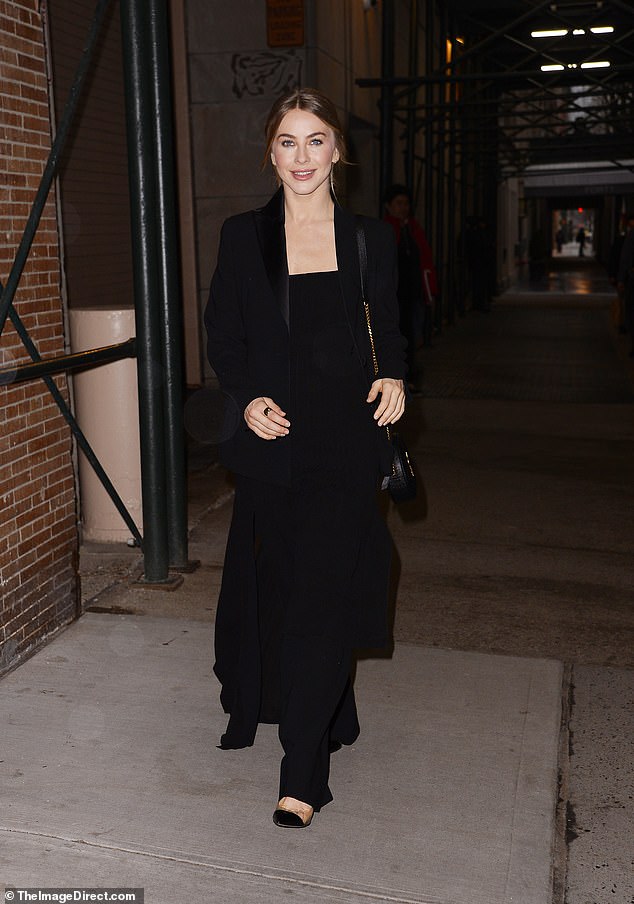 Her special Step Into… The Movies with her brother Derek Hough will premiere, March 20.

And days before the world premiere, Julianne Hough and brother Derek were spotted heading to the Tamron Hall Show studios in New York City.

Julianne, 33, looked chic in a black dress with a matching blazer on Thursday in the Big Apple.

Striking: Her special Step Into… The Movies with her brother Derek Hough will premiere, March 20. And days before the world premiere, Julianne Hough and brother Derek were spotted heading to the Tamron Hall Show studios in New York City on Thursday

Julianne hit the pavement in flats with a black and gold hardware handbag, slung over one shoulder.

The star pulled her tresses back while rocking coral lipstick and rosy blush on her cheekbones.

The siblings star in Step Into…The Movies, which is a hour special airing on Sunday, March 20 at 10 pm EDT on ABC.

The special feature celebrates some of the most legendary movie dance sequences like Singin’ In The Rain, Moulin Rouge, Beauty and the Beast, Dirty Dancing, La La Land, Saturday Night Fever and Chicago.

The special draws inspiration from the classic films in the special.

The show is a prelude to the 94th Annual Academy Awards, which takes place in Hollywood March 27 and will air on the network.

Wow: The siblings star in Step Into…The Movies, which is a hour special airing on Sunday, March 20 at 10 pm EDT on ABC

Last month it was reported that she and Laich agreed the terms of their divorce, almost two years after they split.

The 33-year-old former professional dancer filed for divorce from the 38-year-old ex-ice hockey star in November 2020, six months after they confirmed they had decided to go their separate ways.

Us Weekly reported in late February that the exes’ divorce is close to being finalized as they await approval from the judge.

The papers filed read: ‘The parties have entered into a written agreement regarding their property and their marriage or domestic partnership rights, including support, the original of which is being or has been submitted to the court.’

The stars: Julianne and brother Derek seen with Kenny Ortega and Christopher Scott

According to the news outlet, Julianne has given up her right to receive spousal support from Brooks.

The pair announced their separation in a joint statement after they had spent months self-isolating separately amid the coronavirus pandemic, with Brooks in Idaho and Julianne at home in Los Angeles.

Their statement read: ‘We have lovingly and carefully taken the time we have needed to arrive at our decision to separate.

‘We share an abundance of love and respect for one another and will continue to lead with our hearts from that place. We kindly request your compassion and respect for our privacy moving forward.’

Sources had claimed that although they tried to work on their marriage, they ultimately felt as though they had too many ‘problems’ to make a romance work between them.

It’s over: Hough and Brooks Laich have agreed the terms of their divorce, almost two years after they split. Seen in 2019 in LA

One insider said: ‘Julianne and Brooks just can’t get past their problems. Julianne had a dinner party with friends a few months ago, which Brooks came to. They were trying to be lovey-dovey with each other and have a good night with a few friends, but Brooks ended up bringing up some of their issues in front of everyone and it became a big fight.’

The former couple, who tied the knot in 2017, remained close after splitting in May 2020, because of their mutual friends and shared business deals, but decided they’re better off as friends.

The source added: ‘When they took time apart, Julianne was heavily involved with Kinrgy, and because Brooks helped her develop it, they continued to stay in touch and also were connected because they share the same friend group. They missed each other and ended up hooking up a few times during their breakup and have tried to sort out their marriage and business commitments.’