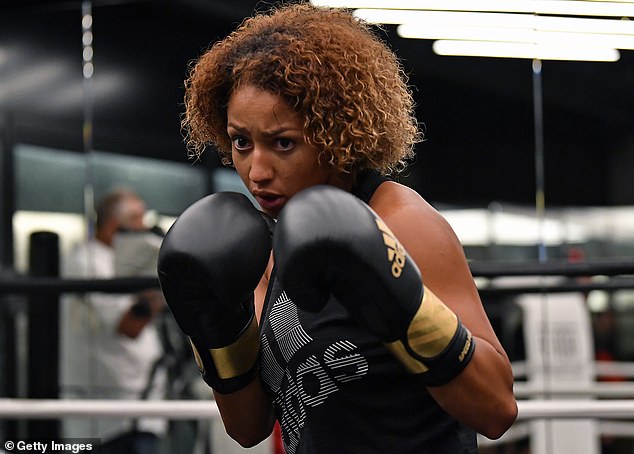 Estelle Mossely has found some peace over recent weeks. ‘Life is quieter now,’ the French fighter says. ‘I can sleep a little better.’ Even as her journey towards twin peaks starts afresh.

‘It’s a new chapter and I think it’s the most important chapter,’ Mossely says. ‘Now I will show the world what I can do with a double challenge – the first in professional (boxing) is to unify all the titles and the second is to be the Olympic champion for a second time in Paris.’

This sense of renewal arrives as Mossely approaches her 30th birthday.

The tranquillity comes from a couple of weeks away from two young sons.

The Frenchwoman has grown used to life on the hamster wheel. In the ring. And at home.

In 2016 she beat Katie Taylor before winning her country’s first Olympic gold in female boxing. She trained as an computer engineer. She combined life as mother and fighter.

‘It’s a little strange for me because the whole time I did a lot of things – I worked, I built business and I trained too,’ Mossely says.

Now, though, those days of juggling are over. Now promoter Richard Schaefer is comparing her to Floyd Mayweather. ‘Now it’s an important moment in my career,’ the 29-year-old says.

Her quest for more gold will have to wait until 2024.

The journey towards professional supremacy, which she hopes will include a fifth fight with Taylor, begins anew on Friday night. Mossely is in Dubai to fight Yanina del Carmen Lescano for the IBO lightweight crown.

After nine professional fights – all in France, all wins – history beckons. Never before have two women headlined a title fight in the Middle East.

‘It’s important for me because I think a big career is not only about victory,’ Mossely says. ‘It’s about building, at the same time, a big story… (this) is a big moment in my career and it’s a big moment for sport and boxing in general. I really want to stay in the mind of people as a woman who built a story in the sport. And in life.’

These are exciting times for women’s boxing.

Next month, Taylor meets Amanda Serrano in the first all-female fight to top the bill at Madison Square Garden.

Mossely wants to play her part in this era. She is chasing world titles at lightweight; the four major belts are all held by Ireland’s Taylor. The plan for Mossely? Build towards an undisputed title fight in 2023.

They met four times in the unpaid ranks. After three defeats, Mossely was victorious at the 2016 world championships. She then won gold in Rio. And yet it was Taylor who turned over amid fanfare and fame. It is Taylor who has carried the flag for women’s boxing in the past half-decade. Does that bother Mossely?

‘No I think it’s normal – she had big (success) as an amateur. After that, she turned pro really fast,’ she says.

‘I didn’t have the same calendar because after the Olympic games I had children – two – and that’s why it’s taken a little bit more time for me to do what I want to do.’

Mossely adds: ‘My story is my story, Katie’s story is her story… this fight can have a lot of attention and it’s good for us to give a good show to the people. It’s good for boxing too because it’s like revenge for our amateur story.’

Staying patient has paid off for Mossely before, of course.

‘I fought Katie four times as an amateur. It took a little time to have my victory but I finished by having it,’ she says. ‘That’s why, when I see my career as a professional now, I say: “Okay I’m not now the best boxer in the world. But like in the amateurs, I take my time to build my career.”’ Then, when the time is nigh? ‘I can win the fight.’

It’s a delicate balance to strike. Mossely wants two or three more fights before challenging Taylor. But, with Taylor already 35, she can’t afford to wait too long.

‘I will not have another opportunity to become the boxer I can become. A big challenge like this, a big fight like one with Katie can be now but not in five or six years,’ Mossely says. ‘That’s why the moment is now. My moment is now… it’s the same for the Olympic Games. I will not have a second chance to do the Olympics in my country.’

No wonder she has narrowed her focus.

No wonder those days working as an IT engineer are done. ‘Life in the office is more quiet. It’s not the same stress,’ Mossely says. ‘But sometimes we have the same things – working with a team, challenging yourself when you have a target… in sport it’s about winning. In the office it’s a little different but it’s like a victory when you do a good job.’

In the ring now, however, victory alone is not enough. Not when you’re being likened to the Pretty Boy.

‘Richard compared me to Mayweather because he’s not just a boxer who fought without losing but he’s a boxer who won and won with style… for me that’s the most important thing.’ And that means avoiding any scars of battle. ‘The most little damage is too much for me,’ Mossely laughs.

Much easier to perform at your best, of course, when well prepared – and well rested. Mossely’s typical routine? ‘School in the morning, go to training, having a little rest… go to training, come back, go to school, get my children,’ she explains. Young Ali and Magomed are not sheltered from her sacrifice. ‘It’s important my children understand this – that’s why they take part sometimes in my preparation, sometimes they come to training to see why I’m not here this day or this night.’ It’s why they’re in Dubai, too. Over recent weeks, the boys have stayed with Mossely’s parents. A family holiday awaits after fight night. For Mossely, even bigger rewards might lie further round the corner.

Estelle Mossely will be fighting as part of the Probellum Evolution event in Dubai (March 18-19), live exclusively on Eurosport’s linear channels, discovery+ and the Eurosport app. Check local listing for further details.