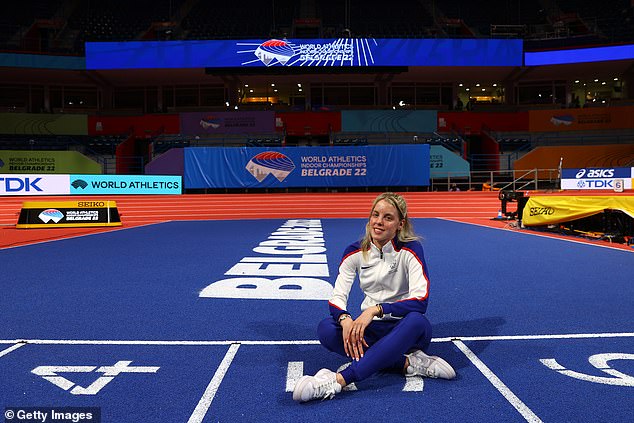 After the grandest of breakthroughs in 2021, a sheet of paper in Keely Hodgkinson’s home reveals that bigger things are targeted this season.

In the past month, the Olympic silver medallist has run the sixth fastest indoor 800m time in history, and she competes at the World Indoor Championships in Belgrade this weekend as an enormous favourite for gold.

It is the first staging post of what the 20-year-old has identified as a four-pronged campaign for major medals this season, with the World Championships outdoors in the US in July, followed by the Birmingham Commonwealth Games and European Championships in a frantic summer.

Hodgkinson, whose semi-final is on Saturday ahead of Sunday’s final, said: ‘I did write down “world champion” (as a target for 2022). So that is an expectation for me. Hopefully I can go back and tick it off when I get home.

‘I’ve set some goals but obviously it just depends on how the body is and how I am. But they’re pretty big – they are bigger than last year. So we’ve got some ticking to do.

‘I’d love four major medals. I wouldn’t rule it out. I can definitely see myself going for three – the world outdoors is obviously number one, the Commonwealth’s being a home Games, I really want to do that, and the Europeans we’ll see. I’d like to be there.’

Hodgkinson’s stellar 2021 season saw her emerge from being a virtual unknown to an Olympic silver medallist. She also won the European indoor title and the Diamond League crown.

Hodgkinson added: ‘Now I expect more of myself. I expect times to be quicker, more consistency, I want to target the bigger races.’

Reigning world indoor Katarina Johnson-Thompson will compete in the pentathlon on Friday for the first time since her Olympics were wrecked by a calf injury last August.

The men’s 60m on Saturday will feature a showdown between the shock Olympic champion Marcell Jacobs and Christian Coleman, who has returned from an anti-doping ban.