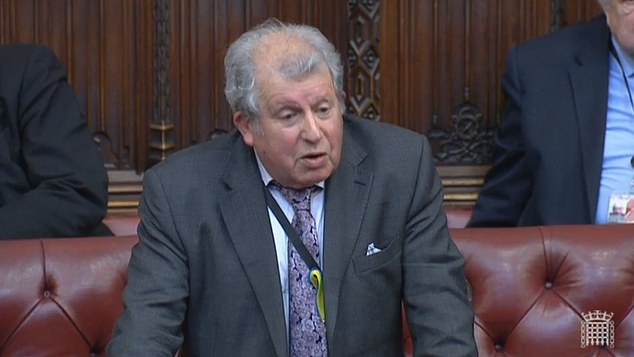 A ‘dozing’ Labour peer today flatly denied he had been asleep during a House of Lords debate and demanded an apology from the Government Whip who rebuked him.

Lord Young of Norwood Green told the chamber he wanted to ‘set the record straight’ after the extraordinary clash with Baroness Bloomfield of Hinton Waldrist earlier this week.

She bluntly told the 79-year-old to sit down when he tried to intervene in a discussion on genetic modification on Monday night, saying he had been ‘fast asleep’ throughout the minister’s contribution.

Intervening in the House today, Lord Young said he had been ‘discourteously dismissed’ and her claim ‘wasn’t true’ – insisting that he had been bending close to one of the speakers in the red benches.

‘In fact what I was doing was listening as we do with my ear against the speaker,’ the veteran peer said.

‘Today my hearing aid batteries are now in and I’m not reliant on that.’

The Labour peer could be seen at 9.26pm on Monday burying his head in the House of Lords’ red benches

At 9.28pm on Monday night the peer was slumped in his chair as his colleagues continued the debate

He added: ‘Not only did it give some damage to my reputation, hopefully passing, but also in my view damaged the reputation of the House, unnecessarily in my view.’

Lord Young said there ‘procedures for dealing with’ incidents where members were alleged to have fallen asleep.

He went on: ‘I received what purported to be a letter of apology from Baroness Bloomfield and it started with the lines ”Whatever the rights or wrongs”.’

‘It seemed to me that wasn’t really an apology – that was more, shall we say, an equivocation at its best and I don’t accept that that was an apology.’

Lord Young said there was an ‘obligation’ to ‘set the record straight in this house’ and ‘she should be here to hear that, and in my view to have apologised to the House.’

‘She has chosen to be absent, you can draw what conclusions you would like,’ he swiped.

The comical exchange came during a debate on rules that would allow the UK to deviate from EU law on GM crops.

As he stood to speak in the debate, Lord Young said: ‘I wanted to take part in this debate because I stake my position as somebody who is a Remainer, but if there’s two things that I welcome in coming out of the Common Market, one is the CAP and this particular gene editing…’

Government whip Lady Bloomfield intervened to say: ‘I am sorry, but the noble lord was fast asleep for the entire duration of the minister’s speech.

‘He really should not participate in this debate having failed to take advantage of the ability to hear him.’

Lord Young, a former union boss who has also served as a BBC governor, replied: ‘Sorry?’

Lady Bloomfield said: ‘I am afraid the noble lord was fast asleep for the entirety of the minister’s opening speech.’

Lord Young’s response is not clearly audible in footage. PA Media reported that he said he was ‘not now’ asleep, but Hansard recorded it as a denial he had been asleep.

Lady Bloomfield then said: ‘Well I had to send a note to you – in order to wake you up – by the doorkeeper.’

Environment minister Lord Benyon said the The Draft Genetically Modified Organisms (Deliberate Release) (Amendment) (England) Regulations 2022 would allow the UK to ‘remain at the forefront’ of research into GM crops.

During the opening speeches at 9.22pm on Monday Lord Young (top left) seemed to be following the proceedings

The doze have it: Politicians caught ‘resting their eyes’ at Westminster

Lord Young of Norwood Green is far from the first politician to be accused of ‘resting their eyes’ in Parliament.

The problems have been so frequent that in 2018 the Tory chief whip in the Upper House sent a memo to colleagues warning of the need to maintain ‘standards’.

And denizens of the Commons have not been exempt from the need to nap.

Tory MP Sir Desmond Swayne nodded off in full view of the cameras in 2018 as he listened to a speech by ex-Cabinet minister Ken Clarke.

He later suggested an early morning swim had been to blame, and made light of the episode the following day by asking then-PM Theresa May to answer a question that ‘keeps me awake at night’.

Mr – now Lord – Clarke joked that before a subsequent debate he checked that Sir Desmond had ‘a cup of coffee’.

Jacob Rees-Mogg came under fire for his extremely relaxed posture during a Brexit debate in 2019.

His elegant sprawling over the frontbench was widely mocked in memes on social media.

Despite being pictured with his eyes shut Mr Rees-Mogg insisted he had not fallen asleep.

A misleading impression can often be created about whether politicians are asleep because of the positioning of speakers in the parliamentary benches.

The BBC apologised in 2015 after suggesting Tory Alec Shelbrooke, who is partially deaf, was dozing when in fact he was craning to hear what was being said.