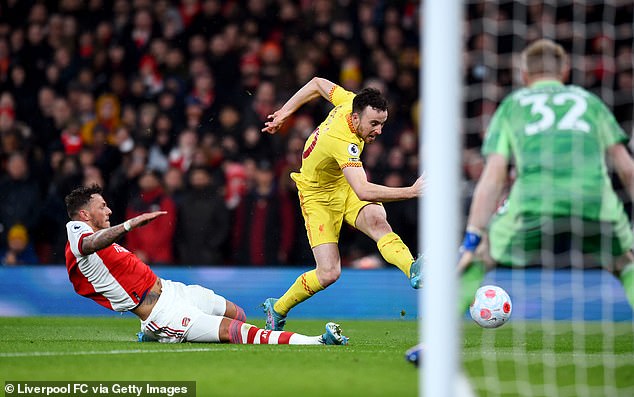 ‘It’s poor goalkeeping… you should never get beaten at your near post’: Arsenal legend Paul Merson slams ‘lazy’ Aaron Ramsdale after his error for Diogo Jota’s opener in defeat against Liverpool

Arsenal had given a good account of themselves up until the moment Jota was played in on goal in the 54th minute.

The angle was tight but the forward’s left footed strike managed to squirm it’s way past Ramsdale at his near post.

Liverpool never really looked back after the goal and proceeded to run out comfortable 2-0 winners.

And Merson believes Ramsdale let himself down.

‘It is poor defending all round and its poor goalkeeping,’ Merson told Sky Sports.

‘The goalkeeper gets lazy, he thinks it is going to be a cross. You should never ever get beaten at your near post.’

Graeme Souness agreed Ramsdale had got his positioning wrong, adding: ‘He gets a good hand on it but he is nearly at full stretch, that is how out of position he is. That is poor positioning.’

Jamie Carragher meanwhile believed Ramsdale was too late to react to Jota’s effort.

‘That looks for me like a problem. When the ball is struck he is still jumping into the air.

‘When he lands he is reacting late and hasn’t got the strength to hold it out with his hand.’