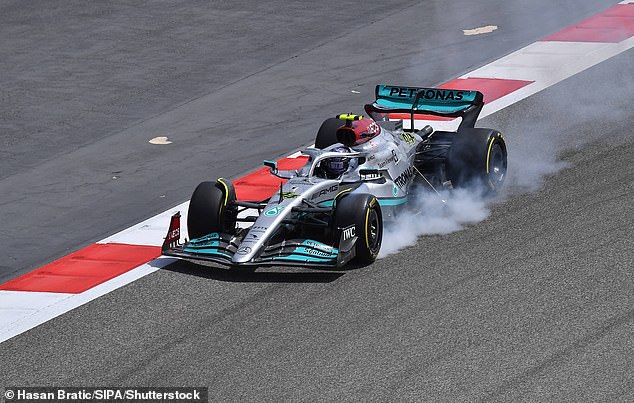 Lewis Hamilton insists Mercedes have ‘got a lot of problems’ and fears they might not be able to challenge for victories for the first FOUR races, with both Red Bull and Ferrari looking quick ahead of the season opener in Bahrain

Lewis Hamilton fears Mercedes might need a few races to unlock the performance of their car and challenge for victories in the new F1 season.

The 2022 season gets underway in Bahrain this weekend, with the 37-year-old hoping to again mount a title challenge and win a record eighth drivers’ championship.

However, there were some concerns after testing with Mercedes not appearing to have the pace to challenge Ferrari or Red Bull.

‘The testing has been difficult,’ Hamilton said during a visit to Expo 2020 Dubai.

‘It’s crazy because, years ago, we used to have a lot of test days and now we only have, literally, three days in the car altogether. So it’s not a lot of laps.

‘When we go into this race, this week, we’re still learning about the car – we probably will be for the first four races at least. We’ve got a lot of problems.’

Both Hamilton and his new team-mate George Russell claimed after pre-season testing in Barcelona that the reigning constructors’ champions have ‘some hurdles to overcome’.

Hamilton even appeared to have some doubts whether they’ll be quicker than McLaren.

He said after testing: ‘We’re not the quickest at the moment. I think Ferrari look to be the quickest and perhaps Red Bull and then maybe us or McLaren – but we’re currently not at the top.’

One of the big issues is the ‘porpoising’ phenomenon that teams up and down the grid have experienced to varying levels during testing.

Teams such as McLaren and Red Bull have seemed to reduce the ‘porpoising’ effect as testing has progressed, though Mercedes have struggled to overcome it.

At Expo 2020 Dubai, Hamilton said: ‘As you have seen, everyone is bouncing up and down.

‘It’s interesting, because I was worried that, you know, I’m 37 now, so I’m racing against George, he’s only 24, right? Hamilton said on the issue. ‘

‘But he had problems and he was feeling it in his back. So it’s not just an age thing.’

Hamilton, speaking at Expo 2020 Dubai, fears Mercedes have got ‘a lot of problems’

Despite Mercedes’ apparent issues, their competition have thrown shades of doubt over comments made by their drivers regarding how competitive they are.

Ferrari’s Carlos Sainz said: ‘It’s typical Mercedes, typical George (Russell), hype up the others and then come to the first race and blow the competition away.’

Reigning drivers’ champion, Max Verstappen, said: ‘It’s always like this. If someone is doing well or a team that everyone expects to do well, then it’s: ‘Oh no, we’re definitely not the favourite.’

‘And then a week later, when things do go well, all of a sudden it’s: ‘Oh no, but we turned it around completely within a week. Not normal, unbelievable work. Thanks to all people in the factory.’

Going into last season, Mercedes didn’t appear to have the pace of the Red Bull in testing, but went on to win the season opener in Bahrain.

The new season gets underway on Sunday at the Bahrain International Circuit.