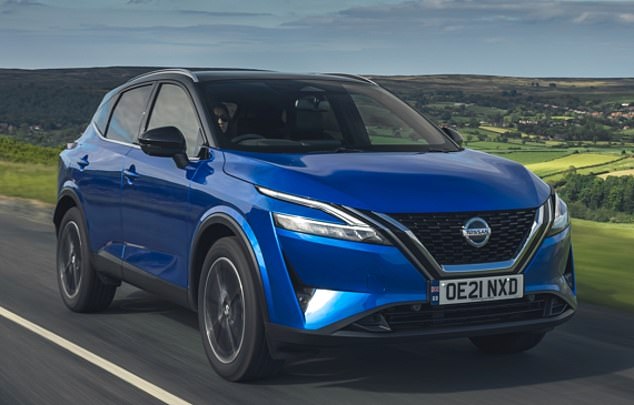 As Nissan celebrates 35 years of production at its Sunderland factory, the brand is announcing further plans to spearhead battery-powered vehicle manufacturing in Britain.

The plant, which has a 6,000-strong workforce, currently produces the top-selling Qashqai SUV (with an electrified Qashqai e-Power about to be launched), alongside the second-generation all- electric Leaf and the funky Juke (with a new hybrid on the way).

Remarkably, around 80 per cent of these are for export, mainly to mainland Europe. Each of the two lines produces a car every minute. And both petrol engines and electric motors run down the same line.

Top-seller: A Nissan Qashqai  SUV – an electrified version called the Qashqai e-Power is about to be launched

As a huge vote of confidence both in Britain and Sunderland, Nissan has recently announced ambitious future expansion plans for the plant.

A new all-electric SUV, based on Nissan’s ‘Chill-Out Crossover Concept’, is already earmarked for Sunderland.

That will be one of 23 new electrified models Nissan is to produce by 2030, with three-quarters of all cars electrified by 2026 and the company pledging to be carbon neutral by 2050.

Last summer, Nissan announced a £1 billion expansion of electric car and battery production at Sunderland, including a new Electric Vehicle Hub and £423 million to create the all-electric SUV.

Power specialist Envision AESC, which owns and operates the existing battery factory at Sunderland, will build the £450 million factory, which will be equipped with state-of-the- art technology.

Nissan is also creating an £80 million green energy ‘micro-grid’ to deliver 100 per cent clean electricity to power its automotive manufacturing in Sunderland.

Nissan calculates that the interconnected projects will together create up to 6,200 new green jobs at Nissan and among suppliers in the UK.

Walk the line: Ray takes an exclusive tour of the Sunderland plant. As a vote of confidence in Britain, Nissan has recently announced ambitious future expansion plans for the site

Green drive: With ten wind turbines and an existing 4.75 megawatt solar farm installed in 2016, Nissan will add an additional 20 MW solar farm to the Sunderland site this May

With ten wind turbines and an existing 4.75 megawatt solar farm installed in 2016, Sunderland will add an additional 20 MW solar farm for completion by this May, doubling the amount of renewable electricity generated to 20 per cent of its needs.

Separately, this summer will see first deliveries of the new all-electric Nissan Ariya SUV priced from £41,845 to £58,440 but built in Japan.

It’s a sharp contrast to some of the dire warnings issued by Nissan bosses before the Brexit vote.

I made the journey up to Sunderland in a Qashqai this week and I remember well the effect Nissan’s arrival had on the local economy, morale and pride because I grew up in the North East, though in Newcastle.

Prime Minister Margaret Thatcher opened the plant in September 1986 — then with just 430 staff — as the first Nissan Bluebird ‘Job 1’ rolled down the line.

As well as now employing 6,000 people, the factory supports 46,000 more jobs with suppliers.

This newspaper proclaimed the Bluebird ‘probably the best-built car in Britain’.

Since 1986, three-and-a-half decades and more than £5 billion of investment later, nearly 11 million cars have followed it down the line at the plant.

To commemorate the 35th anniversary of production, Nissan created a new custom-built version of its first Bluebird car — powered with a pure electric motor from its current zero-emissions Leaf.

To commemorate the 35th anniversary of production, Nissan created a custom-built version of its first Bluebird car – powered with an electric motor from its zero-emissions Leaf

It called the one-off project car Newbird in honour of the two vehicles that bookend the Sunderland plant’s history.

The Bluebird’s original petrol engine and gearbox were removed and a Leaf motor, inverter and 40kilowatt-hour battery pack installed in its place.

That gave it a range from a single charge of around 130 miles and the ability to accelerate from 0-62mph in just under 15 seconds.

Nineteen staff who started in 1986 are still working today. And while in 1986 each Bluebird took more than 22 hours to build, a new electric Leaf takes just ten hours.

So why Sunderland? The UK economy had been reeling throughout the 1970s from economic decline, which came to a head in the Winter of Discontent and Margaret Thatcher’s election.

One of the UK’s industrial basket cases was the motor industry, which was beset by walkouts, lousy industrial relations, poor quality products, weak management, restrictive practices and high costs. Some companies went bust, others were nationalised to prolong their agony.

A new all-electric SUV, based on Nissan’s ‘Chill-Out Crossover Concept’ (pictured), is already earmarked for Sunderland

So when Japanese car-makers such as Nissan, Honda and Toyota started looking to set up car and other factories in the UK, they steered clear of the traditional strike-prone car-making hotspots in the Midlands.

Nissan chose Sunderland with its plentiful, open-minded, and frankly grateful workforce, which could be trained to do things ‘the Nissan way’.

Britain’s closeness to the rest of Europe (at the time it was a member of the EEC) was certainly one draw. But economics were not the sole criteria.

I have been told by Japanese motor industry executives that they feel more empathy with the British character — somewhat reserved, polite, understated, sometimes quirky — which they put down to our two nations being ‘island dwellers’, and not part of a vast continental landmass.

Make of that what you will, but major investment decisions have been made on less. And ironically, the only risk of things being lost in translation was not down to the Japanese but the local accents.

I well remember an early Nissan TV advert in which the local workforce spoke in their natural dialect – but with sub-titles so other English people could understand.