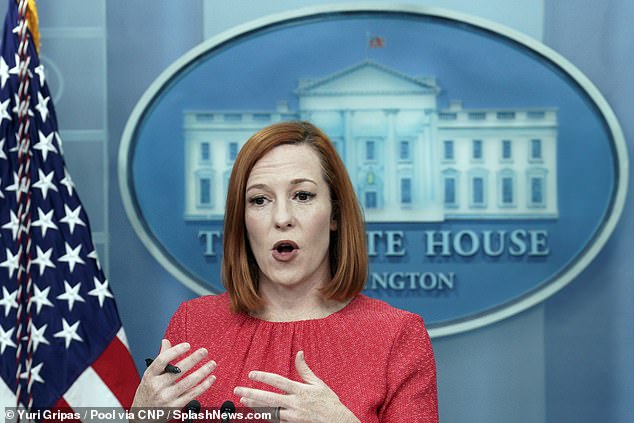 White House Press Secretary Jen Psaki dodged questions about new developments in the Hunter Biden laptop saga Thursday – directing queries to the Justice Department after the New York Times said investigators confirmed the authenticity of emails appearing to be from his infamous computer.

The matter came up hours after the Times referenced it in a story about how the president’s son had settled his unpaid tax bill amid a federal investigation.

The report referenced emails between Hunter Biden and former business associates, which it said appeared to be from a ‘cache’ of files that appears to have come from the laptop, which was cited as the source of a series of damaging reports the New York Post published weeks before the election.

‘The email and others in the cache were authenticated by people familiar with them and with the investigation,’ the paper reported.

Asked at Thursday’s White House press briefing about the paper’s authentication of the information a year and half after the original report, Psaki responded: ‘I would point you to the Department of Justice and also to Hunter Biden’s representatives – he doesn’t work in the government.’

‘I would point you to the Department of Justice and also to Hunter Biden’s representatives – he doesn’t work in the government,’ responded White House Press Secretary Jen Psaki after the New York Times reported that investigators authenticated emails purported to come from Hunter Biden’s abandoned laptop

She was asked about the Times report on Wednesday, although DailyMail.com had computer experts verify the laptop months ago

She didn’t offer much more when asked by DailyMail.com about her own labeling of the laptop as Russian disinformation in October 2020.

Biden had blasted reports on the laptop as a ‘bunch of garbage.’

‘There are 50 former national intelligence folks who said that what he’s accusing me of is a Russian plant,’ he said, adding that ‘five former heads of the CIA, both parties, say what he’s saying is a bunch of garbage.’

Both Biden and Psaki were referencing a letter from 50 top former intelligence officials saying the laptop stories had ‘all the classic earmarks of a Russian information operation.’

The laptop contained a trove of embarrassing images

Psaki tweeted about ‘Russian disinfo’ weeks before the election

“If we are right, this is Russia trying to influence how Americans vote in this election, and we believe strongly that Americans need to be aware of this,’ the officials wrote, four years after the Intelligence Community interfered in the 2016 elections.

However the Times story established that government investigators had confidence at least in the information uncovered on Hunter’s laptop, however bizarre the story of how the information surfaced.

The laptop resulted in numerous reports about Hunter Biden’s business dealings, and contained a trove of embarrassing photos.

The original story in the Post stated that Hunter had dropped off the his Mac at a computer repair shop in Wilmington, Delaware but neglected to pick it up.

The Times had cast doubt on the provenance of the laptop during its own reports.

It also reported that prosecutors had examined emails between Biden and Devon Archer, one of his business partners at the Ukrainian energy firm Burisma, citing sources familiar with the probe.

DailyMail.com authenticated the laptop a full year earlier, and was the first – and only – news organization to publicly verify its contents using expert analysis.