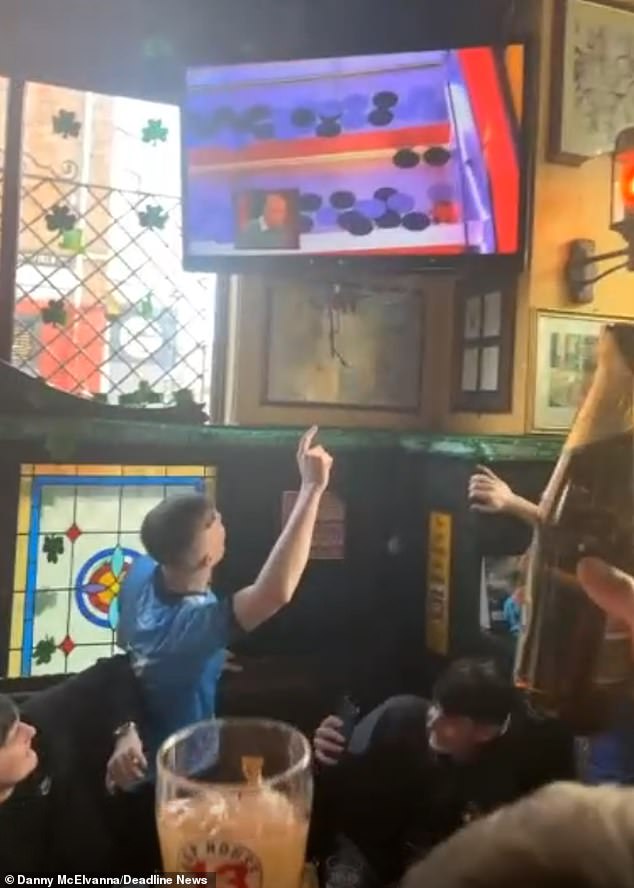 What a finish! Hilarious moment pub full of racing fans erupts into celebration after they back a winner on TIPPING POINT quiz show

This amazing video shows a pub full of racing fans erupting into celebration after seeing a big win – for a man appearing on the game show Tipping Point.

There were raucous scenes in the Hatfield House Bar in Belfast yesterday when supporters saw a man named John win £10,000 on the ITV show.

Footage captured by Danny McElvanna, who had gone to the pub to watch the Cheltenham races on the pub’s TV, shows dozens of men cheering the moment it is confirmed John has won the prize.

People in the Hatfield House Bar, in Belfast, gathered around the TV screens yesterday to watch Tipping Point

The group were willing a contestant on the ITV show to win the £10,000 jackpot after they spent the afternoon watching the racing at the pub

In the footage a group of men can be seen watching the television screens intently as John takes on the final round of the show, which is based on a classic penny falls-style arcade game.

On screen a black counter is tipped off a ledge onto a counter below, causing the crowd to cheer, but they quickly stop and wait with bated breath.

There are cries of ‘go on, go on’ from the pub-goers, who are all backing their man to win.

The black counter is then pushed forward by a machine and it, in turn, pushes a silver counter adorned with a red star into a pit, indicating John has won the jackpot.

People in the pub go wild, cheering, jumping around and screaming in delight.

Speaking today, Danny said: ‘We had gone to the pub to watch Cheltenham and we had done so.

‘When it finished, though, they never turned the channel back over so it ended up on Tipping Point.

‘We just started watching and then he ended up winning.

Upon seeing John had won the group began to jump, cheer and scream in celebration for the win

Punters at the Hatfield House Bar, pictured, celebrated the victory as if they had won the jackpot themselves

The show they were watching was actually a compilation, featuring one of the programme’s most dramatic endings, after the regular episode was moved to accommodate the racing on ITV.

The show sees contestants answer general knowledge questions for the chance to drop counters into the tipping point machine.

These counters can then be used to push other ones into a pit to win varying amounts of money.

Host Ben Shephard, who also presents Good Morning Britain, was left in tears of laughter after being shown the clip of the pub-goers enjoying his show.

After watching the clip, the father-of-two said he thought students got together in the pub to watch the show.

‘I think they watch Tipping Point and then they watch The Chase and they have a big event.

‘But then what better way to celebrate a jackpot than with a pint? I think we need to go there for a pint!’