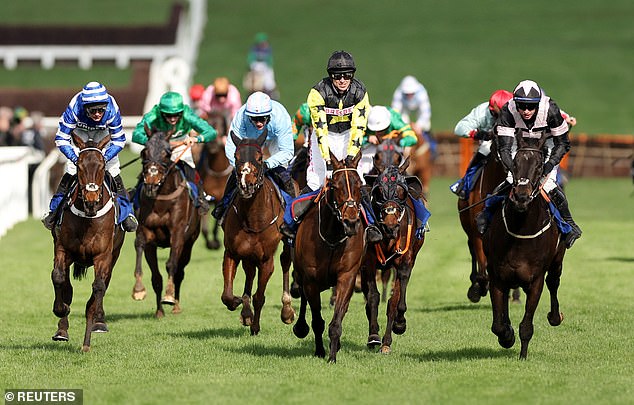 Just days after his wife gave birth to their second child, O’Brien was back to business to add a Festival winner to his list of achievements.

Third Wind (25-1), trained by Hughie Morrison, and Fergal O’Brien’s Alaphilippe battled out the finish after jumping the last.

There was nothing between them with Third Wind just proving the stronger in the closing stages to get the verdict by a neck at the end of three miles.

The stewards held an inquiry as the first two came close together but the result was allowed to stand.

Morrison said: ‘On his day he’s a very good horse and when the rain came, he had the soft ground he likes.

‘We said jump off positively and Tom took the brave route down the inner. He said it was easy, and he didn’t even have to hit him.

‘I felt it was a needless inquiry because they hardly touched, and if we’d lost it I would have appealed. It was six of one and half a dozen of the other, and nothing happened.

‘Tom said he was really relaxed and loved that ground. It was heavy at Haydock but he’d run a nice race at Warwick, so we came here hopeful of a good run.’