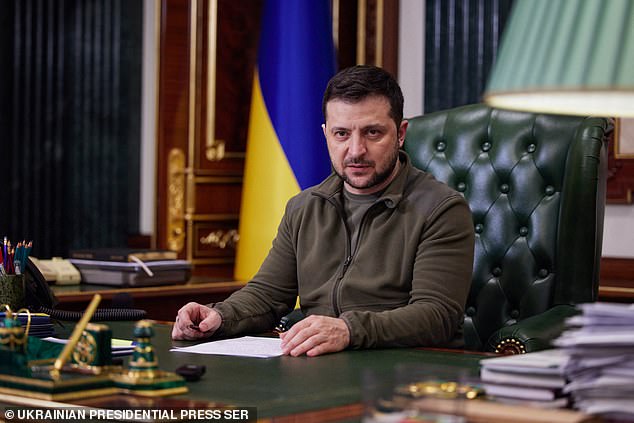 By Associated Press and Adam Solomons For Mailonline

Ukraine has joined the European electricity grid and ended its dependence on Russian supplies after an urgent appeal by Volodymyr Zelensky.

Although only on a trial basis to begin with, the move represents Kyiv’s latest effort to distance itself from the Russian state.

ENTSO-E said: “This is a significant milestone.”

Grid operators had been preparing the switch since Russia’s annexation of Crimea in 2014, but the large-scale Russian military assault on Ukraine last month prompted an emergency request by Zelensky to speed up a process that was expected to take years more to complete.

ENTSO-E, whose 39 members operate the world’s largest interconnected electrical grid, said the move means they will be able to help maintain the stability of the Ukrainian and Moldovan power systems.

The two countries were previously part of the Integrated Power System that also includes Russia and Belarus.

This made Ukraine dependent on Russia’s grid operator despite there being no electricity trade between the two countries for years.

“This step will give Ukraine the opportunity to receive electricity if (Russia) continues to destroy our power infrastructure, and thus to save our power system,” said Volodymyr Kudrytskyi, who chairs Ukrainian grid operator Ukrenergo.

“We are sincerely grateful to our European partners for their great support and assistance during these difficult times.”

Ukraine will now depend on the European electricity grid, the world’s largest, as it hopes to replace its reliance on Russian gas and electricity sources with German supplies (pictured)

Georg Zachmann, an expert with the Brussels-based think tank Bruegel, said the switch will allow energy suppliers in the continental grid that stretches from Portugal to Poland to supply electricity to Ukraine if necessary.

This could allow Ukraine to turn off some of the coal-fired power plants it currently keeps running to ensure grid stability, saving precious fuel in wartime, he said.

In the long term, Ukraine could export surplus electricity generated by its nuclear power plants to the rest of Europe.