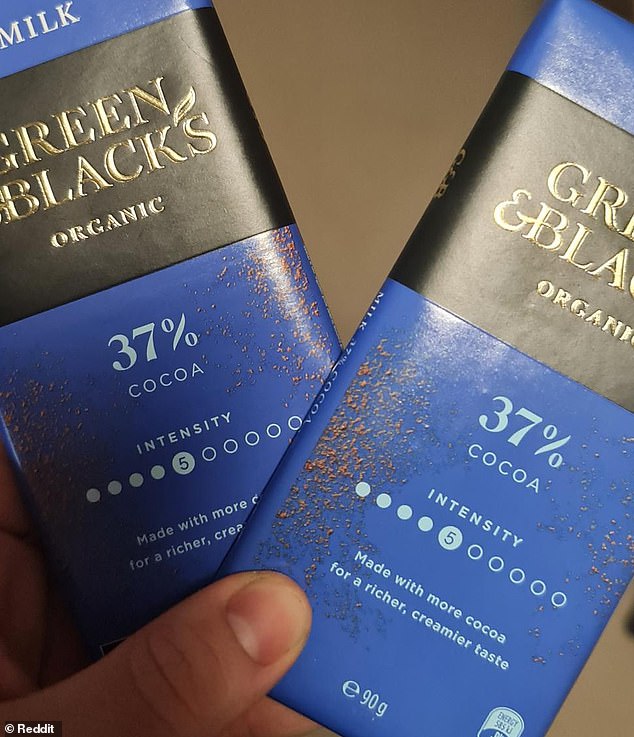 A Woolworths shopper has revealed how he was sent two 37% dark chocolate blocks in place of the single 70% block he ordered, which was out of stock.

The man posted a picture of the two chocolate blocks on Reddit alongside an amused caption.

‘Woolies online solution to being out of stock of 70% cocoa chocolate. I guess it adds up?’ he wrote.

A Woolworths spokesperson told FEMAIL the company realises they don’t always get substitutions right and urge unhappy customers to contact them.

A Woolworths shopper has revealed how he was sent two 37% dark chocolate blocks in place of the single 70% block he ordered, which was out of stock

‘This is actually hilarious,’ you are lucky you didn’t end up with Black and Gold,’ one woman said.

‘You just know a 14-year-old packer looked at your order and did some math to find you a solution,’ one woman laughed.

Others insisted the ‘teenager’ who packed the bags deserves a promotion.

‘What are you complaining about? You got 4% extra for free! Whoever did this deserves a raise for putting the customers needs first,’ one wrote.

Others insisted they ‘love Woolworths logic’ and shared their own stories of surprise substitutes.

What substitutes have people received?

2 – An apple and a pear instead of two papples

4 – A rockmelon instead of a pineapple

‘I once ordered two apples online and they weren’t in stock come pick-up time. What do I get instead? One pear and one apple. I wasn’t even angry, I thought it was hilarious. I love Woolies logic,’ one woman said.

While another told a story of how he got double the amount of milk after a series of substitutes.

But others found their rogue substitutes less entertaining and more annoying.

‘That’s really nice chocolate. But yeah it isn’t a suitable substitute. Worst is when they think full sugar drinks are a substitute for low/no calorie drinks. No Pepsi Max? Sure I’ll just drink this Pepsi you sent, yeah right,’ one person said.

‘They sent me Artificially flavored sugar free maple syrup as a substitute for 100% pure maple syrup,’ complained another.

‘I once ordered a pineapple and was substituted a rockmelon,’ fumed another.

The original poster revealed the chocolate didn’t last long in his house anyway.

‘The Mrs already ate it anyway. So it worked out. The idea was to have one piece of 70% at night time to satisfy the craving. Oh well. Try again next time,’ he said.

Another shopper said they now choose the ‘no substitute’ option when they order online which means they never end up with quirky extras in their shopping.

We have a dedicated team of personal shoppers who work hard to handpick thousands of online orders to the highest standard every day.

While our teams work hard to provide a great experience every time, we don’t always get substitutions right.

We encourage customers to contact us directly should something be amiss with their order so we can rectify it as quickly as possible.