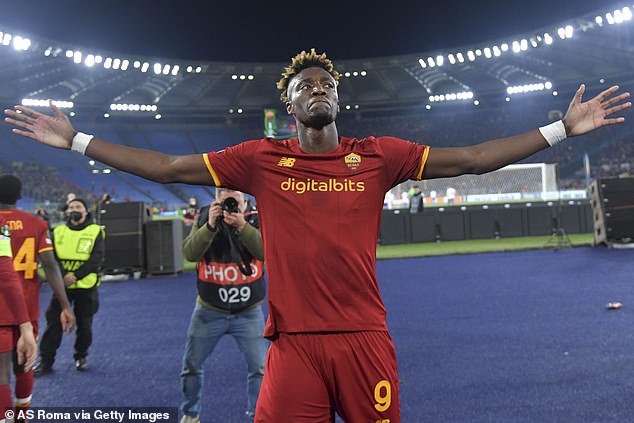 Tammy Abraham scored a last-gasp winner to help Jose Mourinho’s Roma make it through to the Europa Conference League quarter-finals in a dramatic finale on Thursday night.

The former Chelsea striker, on the same day he was called up to the England squad, netted in the 90th minute to make it 1-1 on the night against Vitesse Arnhem and 2-1 on aggregate to the Italian side.

It was Roma’s only shot on target in the whole match, but it was a decisive one as Mourinho’s men progress to the last eight of the competition, along with seven other sides – one of which was Leicester after they edged past Rennes 3-2 on aggregate.

Marseille, after winning the first leg 2-1 against Basel, were pegged back by Dan Ndoye’s goal but two late strikes from Cengiz Under and Valentin Rongier saw them home 4-2 on aggregate.

FC Copenhagen’s brave run in the competition, however, came to an end. After a thrilling 4-4 draw against Dutch side PSV last week, they succumbed 4-0 at home to lose 8-4 on aggregate.

Arsenal loanee Reiss Nelson helped their fellow Dutch outfit Feyenoord through at the expense of Partizan. In the end, the Serbian side were beaten comfortably 8-3 across the two legs.

Elsewhere, Dutch side PSV thrashed FC Copenhagen 4-0 on the night to win 8-4 on aggregate

Marseille also went through to the last eight at the expense of Swiss side Basel, winning 4-2

AZ Alkmaar were edged out by plucky Norwegian side Bodo/Glimt, who salvaged a 2-2 draw on the night and a 4-3 win on aggregate thanks to Alfons Sampsted’s 105th minute goal in extra time.

They could face Roma in the next round after smashing them 6-1 at home in the group stages of the competition.

Elsewhere, Slavia Prague lost 4-3 at LASK but triumphed 7-5 on aggregate, while Greek side PAOK beat Gent 2-1 on the night and 3-1 overall.