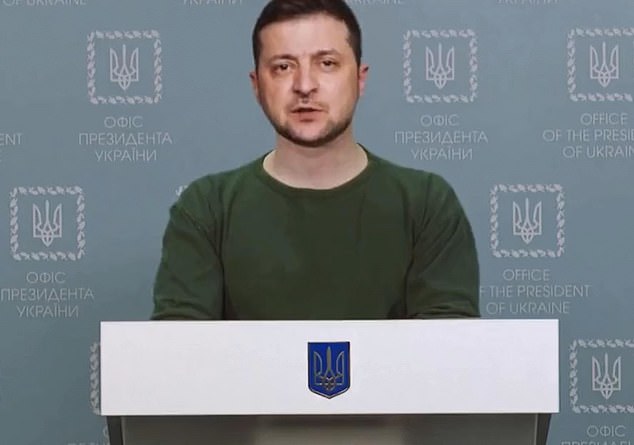 An amateurish deepfake video of Volodymyr Zelensky surrendering to Russia has been laughed off by experts.

The clip shows the Ukrainian president speaking from his lectern as he calls on his troops to lay down their weapons and give in to Putin’s invading forces.

The deepfake has been widely circulated on Russian social media and was even planted by hackers on live TV on Ukraine and on a news site before it was taken down.

Internet users immediately flagged the discrepancies between the skin tone on Zelenskiy’s neck and face, the odd accent in the video, and the pixelation around his head.

Ukraine 24, which was targeted by the trolls, said it was the work of ‘enemy hackers’.

While the clumsy misinformation attempt is unlikely to fool anyone, it has raised concerns about a new front in the information war.

There are fears Russia could flood social media with similar videos hoping to discredit official information put out by Ukraine.

Nina Schick, the author of Deepfakes, said the video looked like ‘an absolutely terrible faceswap,’ referring to programs that can digitally graft one person’s face onto another’s body.

Two weeks ago, Ukraine’s military intelligence agency put out a short video alerting the country to the danger of deepfakes, alleging that the Kremlin was preparing a stunt involving one.

The Russian Embassy in Washington did not immediately return a message seeking comment.

Schick called the fake Zelenskiy video ‘very crude,’ but warned that the it was a matter of time before the technology became more accessible.

‘Expect fakes like this to become easier to produce while appearing highly authentic,’ she said.

Mounir Ibrahim, who works for Truepic, a company which roots out online deepfakes, told The Daily Beast: ‘The fact that it’s so poorly done is a bit of a head-scratcher. You can clearly see the difference — this is not the best deepfake we’ve seen, not even close.’

‘As we start seeing more and more cheap fakes, deepfakes flood the zone, it’s going to desensitise people and allow bad actors to allege, “Nothing is real on the ground, you can’t trust anything”.’

The Defence Secretary spent 10 minutes on a Microsoft Teams call with a man claiming to be Oleksiy Honcharuk (right), who asked about British policy and eventually urged him to shout slogans.

Mr Wallace, who revealed the deception in a Tweet this afternoon, said he became suspicious and terminated the call after ‘several misleading questions’.

Zelensky has responded to the fake video of himself, telling supporters: ‘We are defending our land, our children, our families. So we don’t plan to lay down any arms. Until our victory.’

The move is part of the disinformation war, which has seen Russia conceal its casualties, claim Ukraine started the war and is committing atrocities against its own people.

On Thursday, defence secretary Ben Wallace hit out at Russian ‘dirty tricks’ after he and Home Secretary Priti Patel were targeted by an impostor posing as the Ukrainian prime minister.

The Defence Secretary spent 10 minutes on a Microsoft Teams call with a man claiming to be Oleksiy Honcharuk, who asked about British policy and eventually urged him to shout slogans.

Mr Wallace, who revealed the deception in a Tweet, said he became suspicious and terminated the call after ‘several misleading questions’.

His admission was followed by a similar one by Ms Patel, who said she was targeted earlier this week.

The level of sophistication involved in the hoax has convinced Government sources that it was a Russian plot.

The video call was set up after an email, purportedly sent from an aide at the Ukrainian embassy, was sent to a government department and then forwarded to the Ministry of Defence.

The call was set up and Mr Wallace was put through on Teams to the ‘prime minister of Ukraine’, posing with the country’s flag behind him.

The Times reported that Mr Wallace was asked about the chances of UK warships going to the Black sea and whether Ukraine should get nuclear weapons or join Nato.

Senior Ministry of Defence sources fear Moscow may attempt to splice together Mr Wallace’s comments in an attempt to embarrass him.

He has ordered an immediate inquiry to find out how the impostor was able to speak to him.

The Defence Secretary said it was a ‘desperate attempt’ but ‘no amount of Russian disinformation, distortion and dirty tricks’ could distract from the human rights abuses carried out during the invasion of Ukraine by Vladimir Putin’s forces.