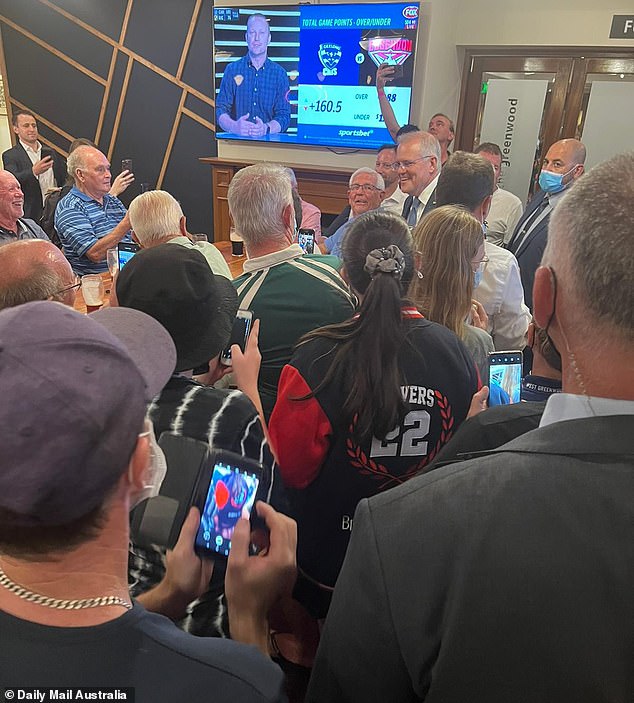 EXCLUSIVE: The picture that proves Scott Morrison CAN win this election despite the polls massively favouring Anthony Albanese

Scott Morrison has been ‘mobbed’ by drinkers upon entering a Perth sports bar in an unscheduled stop.

The Prime Minister chatted with voters at a planned event in a function room at the Greenwood Hotel in the marginal Labor seat of Cowan on Thursday night.

But then he surprised his own staff by walking through to the public sports bar area where he received a rock-star reception from delighted local punters.

A photo sent to Daily Mail Australia by a patron shows the locals – who were in good spirits as they celebrated St Patrick’s Day – smiling and taking pictures of the Prime Minister with their phones.

The patron said: ‘Punters literally mobbed ScoMo. Everyone descended on him.

‘They took selfies and videos. There was lots of laughter and chats about the footy – people were stoked he spent the night here at The Greenwood.’

The Coalition is a massive 10 points behind Labor in the latest Newspoll. If that result is replicated at the May election then ALP leader Anthony Albanese will cruise into power.

But Mr Morrison doesn’t believe polls, and instead judges his chances on the reception he gets from ‘quiet Australians’ who tend not to answer surveys or spout opinions on social media.

It was these quiet Australians that welcomed him into their sports bar last night.

Mr Morrison trailed former Labor leader Bill Shorten in all the polls before the 2019 election but then pulled off a surprise win.

His supporters are confident of a similar outcome this year, with the election most likely to be held on May 14.

Western Australia is a key battleground with Labor targeting the three vulnerable Liberal seats of Pearce, Swan and Hasluck and the Coalition eyeing up Cowan.

The PM’s approval rating is only 42 per cent but the Labor leader’s is a dismal 28 per cent in those four Liberal electorates.

It remains to be seen whether the popularity of WA’s Labor Premier Mark McGowan will help Mr Albanese come polling day.

Mr Morrison has been keen to praise Mr McGowan and talk up the co-operation between the pair during the pandemic.

‘It’s about Federal Labor, it’s not about State Labor, and there’s quite a bit in common I’ve found working with the WA State Government when it comes to how we manage the economy,’ he said on Thursday.

He made the remarks at a joint press conference with Mr McGowan where they were photographed shaking hands and smiling for the cameras.

The Labor premier is yet to appear publicly with Mr Albanese, with the pair only meeting in private last week.