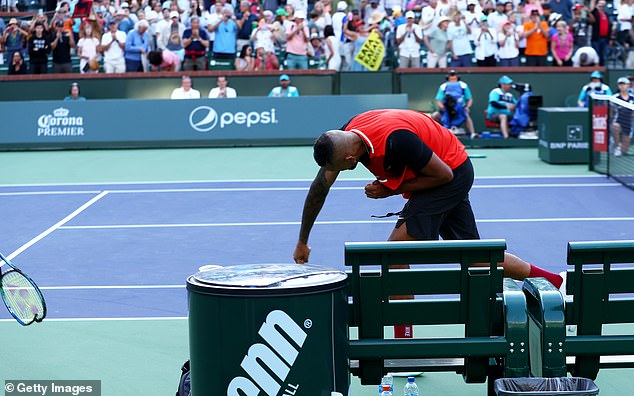 World No.1 Rafa Nadal might have won the match, but it was vintage Nick Kyrgios who swore, smashed his racket, abused hecklers and somehow pulled Hollywood funnyman Ben Stiller into the drama of their explosive quarter final at Indian Wells on Friday.

Kyrgios fell to Australian Open champion Nadal in a three-set thriller, eventually losing 7-6 (7-0) 5-7 6-4 to end an extraordinary tournament. And fans were treated to 24-carat Kyrgios tantrums throughout the rollercoaster clash.

Kyrgios famously managed to beat Nadal in a four-set Wimbledon victory in 2014 to reach the quarter finals on his way to a career-high ATP ranking of 13th in the world.

Kyrgios has also managed to topple Nadal at the ATP Masters 1000 Cincinnati in 2017 and Acapulco, Mexico in 2019 so despite his lowly ranking of 132, he was still favoured to give Nadal a fair workout at Indian Wells on Friday.

But fans got more than what they bargained for, especially Meet The Parents and Zoolander star Ben Stiller who was roped into the drama while watching from the stands with wife Christine Taylor.

Kyrgios’ most memorable outburst came when he singled out Stiller in the crowd while dealing with a heckler. The exchange went like this:

Kyrgios: ‘Are you good at tennis?’

Kyrgios: ‘Exactly, so don’t tell me how to play. [Pointing at Stiller and his wife who were sitting nearby] Do I tell him how to act? No.’

While that exchange was amusing, many of Kyrgios antics were straight out of his textbook on poor behaviour at global tennis events.

Kyrgios was infamously handed a suspended ban of 16 weeks and an additional fine of $25,000 in 2019 for ‘aggravated behaviour’ after a meltdown in Cincinnati and a tirade at the governing body of the ATP who the Aussie firebrand labelled ‘corrupt’.

It started in the first set, which was a gripping contest that went to a deciding tie break. Falling into a 0-6 hole, Kyrgios vented his spleen at spectator in the crowd with an expletive that could be heard all the way back in Melbourne.

It left the chair umpire with no choice but to hand him a point penalty that meant he surrendered the set.

Kyrgios smashed his racket, swore at fans and the chair umpire and demonstrated all the flamboyance he’s famous for in his quarter final meltdown at Indian Wells on Friday

While other tennis players might cool down after such a wake-up call, Kyrgios was just getting started.

He roared to life in the second set, showing what he was capable of with some outrageous tennis that stunned Nadal – who is yet to lose a single match of tennis in 2022. He roared ‘come on’ to channel former world No.1 Lleyton Hewitt and seemed to be channelling his aggression into productive tennis.

But hecklers have never sat well with Kyrgios and while the Stiller incident was amusing, the second incident was ugly.

With the scores locked at 3-3 in the third and deciding set, one genius in the crowd decided to poke the bear and scream out while Kyrgios was serving, costing him the point and ultimately the match.

‘How long you going to let that s**t go on for?’ Kyrgios raged.

‘How long bro? How long?

‘Well done, bro, well done:’ Kyrgios might be in hot water for his tirade against chair umpire Carlos Bernardes, who he accused of failing to control the crowd

To cap off the tirade Kyrgios asked Bernardes, ‘Are you, like?’ before pointing to his head and making a face to insinuate the chair umpire might be stupid.

In contrast, Nadal was a gentlemen throughout the contest and reserved praise for Kyrgios despite the verbal napalm the Australian unleashed.

‘Nick is one of the most talented players on tour… when he’s playing with motivation and passion, he’s someone who can win against anyone,’ Nadal said after coasting his way through the remainder of the third set.

‘Being in the semi-finals, it’s great news for me.’

Australian Open winner Rafa Nadal gets the job done again, advancing to the semifinals of Indian Wells after a rollercoaster win over Nick Kyrgios.