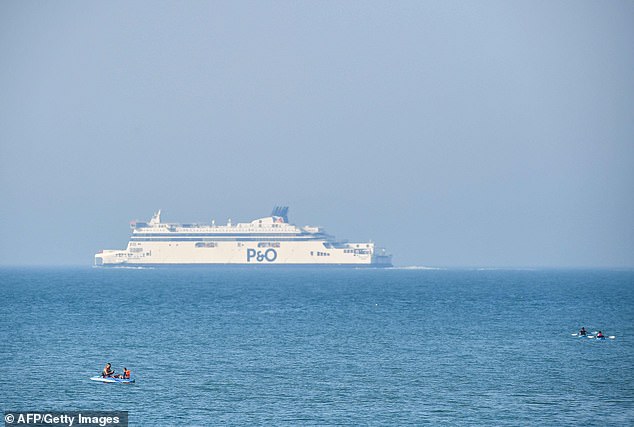 Customers of P&O Ferries who were left stranded today after the firm sacked all of its crew and cancelled all services for the next few days said they have been left ‘high and dry’ and ‘abandoned’.

The company made its 800 of its crew redundant and replaced them with cheaper agency workers.

Stephen Nee, Head of Internal Relations and Employer Relations at P&O, told stunned staff they were all being made redundant with immediate effect via an online Zoom call held at 10.30am on Thursday morning.

The move led to chaos as many staff held defiant protests and refused to disembark their ships, prompting P&O to hire balaclava-clad private security officers to force them to leave.

As the firm also cancelled its immediate upcoming services, it warned of ‘significant disruption’.

Scottish couple Gavin and Jackie Shaw had a P&O ferry booked from Larne in Northern Ireland at 4pm today but were left stranded after the firm’s mass sackings.

Mr Shaw told Sky News this afternoon that he and his wife had been left ‘a wee bit high and dry’ and ‘abandoned’ and had been forced to re-book another ferry with rival firm Stena Line, at a cost of £174.

He claimed that he had been told by P&O Ferries that his ticket would be honoured but said ‘this turned out not to be true’.

We have heard nothing from P&O at all, no communications from them. We are left a wee bit high and dry

P&O Ferries has made 800 workers redundant and replaced them with cheaper agency staff.

Can it do that?

P&O Ferries was updating guidance over Twitter every half an hour yesterday. On some routes, including Dover to Calais, it advised customers to show up as usual and make their way to check-in booths run by ferry company DFDS. On others, such as between Larne and Cairnryan, the firm suggested customers only travel if essential.

If you are travelling in the near future you can book on an alternative carrier. DFDS and Irish Ferries offer routes between Dover and Calais. There are no direct alternatives for the other routes but Stena Line offers services to Ireland and Holland.

The firm has not commented but its terms and conditions say it will refund the ‘total fare’ of a crossing if ‘we cannot ship you at all with us or arrange a suitable alternative ferry crossing, or if you do not wish to take any alternative journey offered by us’.

And P&O Cruises? P&O Cruises is owned by a different company and is not affected by the disruption.

P&O Ferries said it had made the move to plug a £100million year on year black hole in its finances.

The company said the sacked staff would be given ‘enhanced’ severance packages and said the move was a ‘necessary decision’ to protect its remaining 2,200 staff.

The firm’s statement said: ‘We have made a £100m loss year on year, which has been covered by our parent DP World.

‘This is not sustainable. Our survival is dependent on making swift and significant changes now.

‘Without these changes, there is no future for P&O Ferries.’

However, speaking this afternoon, passenger Mr Shaw spoke of his anger.

Speaking from Port Rush, in Northern Ireland, he said: ‘We have heard nothing from P&O at all, no communications from them.

‘We are left a wee bit high and dry. Fortunately we have managed to book a later ferry tonight with Stena Line.

‘P&O were trying to say that all their tickets would be honoured by Stena Line. I am afraid this turned out not to be true.

‘Stena Line don’t know anything of this so-called arrangement. We have had to rebook with Stena Line at a cost of £174, which is unfortunate.

Mr Shaw said he had been trying to contact P&O ‘frequently’ and ‘all morning’ but was not able to speak to any member of staff.

‘We have been reading stuff online that this has happened to everybody who has tried to board a P&O ferry. They have just been left high and dry.

‘We were lucky that we were able to not rebook but it is bad enough for us but 800 pepole have just lost their jobs which is even worse.’

Mr Shaw added: ‘We will certainly be trying to get the money from P&O.

‘What our chances are I wouldn’t like to say. I would imagine their customer services if you can call it that will be pretty much swamped at the moment with people like ourselves.

‘We are not optimistic that we will see our money, to be perfectly honest with you.’

Several workers slammed the ferry firm for ‘scheming behind closed doors before stabbing us all in the back’.

Today, employment lawyers warned the dismissals may well be illegal.

Scottish couple Gavin and Jackie Shaw had a P&O ferry booked from Larne in Northern Ireland at 4pm today but were left stranded after the firm’s mass sackings. Mr Shaw told Sky News this afternoon that he and his wife had been left ‘a wee bit high and dry’ and ‘abandoned’

Some of those who lost their jobs were informed of the decision via video call, with this footage showing a P&O boss telling staff: ‘The company has made the decision that its vessels going forward will be primarily crewed by a third-party crew provider. Therefore, I am sorry to inform you that this means your employment is terminated with immediate effect on the grounds of redundancy’

To help force its staff to disembark, P&O ‘illegally’ hired 16 handcuff-trained officers from a private security firm, with the company telling them the job would last a week and be paid at £14.50 an hour.

Emails sent to security guards drafted in beforehand showed bosses describing a ‘fairly high profile task’ to be dealt with over the course of a week in Dover.

Those enlisted were told to bring ‘cuffs and utility belts’ but were informed they would ‘not need body armour for this task’.

Speaking on Thursday, Karl Turner, MP for East Hull, said P&O Ferries had received £10million from the Government for furloughing 1,100 members of staff during the coronavirus pandemic, and demanded the British taxpayer was reimbursed.

Union bosses later slammed the firm and said it was ‘a scandal’ that British workers had been betrayed when UK taxpayers were made to foot the bill for the company’s costs during the pandemic.

Pictures emerged online showing the captain of The Pride of Hull, understood to be Eugene Favier, sealing his crew inside and addressing defiant workers who refused to leave the holdout ship after 800 workers were made redundant with immediate effect.

Meanwhile, shocking video footage showed the moment dozens of security staff boarded a ferry at Larne port in Northern Ireland to forcibly remove staff who had been staging a ‘sit in’ protest’ onboard.