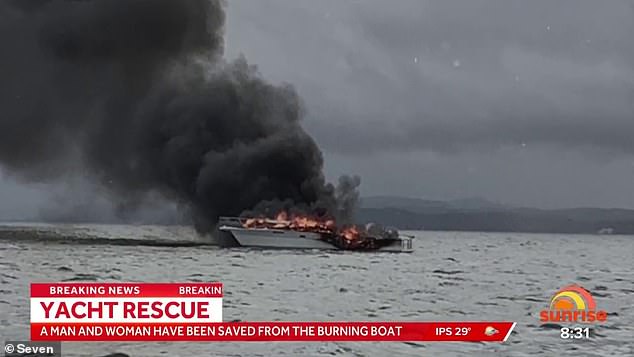 A couple has barely escaped a huge blaze that engulfed their 45-foot yacht this morning.

A man and a woman were pulled from the water shortly after 7am after they were forced to leap from the fully alight Riviera 45 flybridge on Moreton Bay off Brisbane on Friday morning.

They were picked up by another craft after it had been dispatched by a nearby cargo ship.

The couple, a 62-year-old man and a 57-year-old woman from the Sunshine Coast, were initially taken to Brisbane Water Police headquarters for assessment.

It’s understood they have since been transported to the Mater Hospital to be be treated for smoke inhalation.

The vessel sank following the fire.