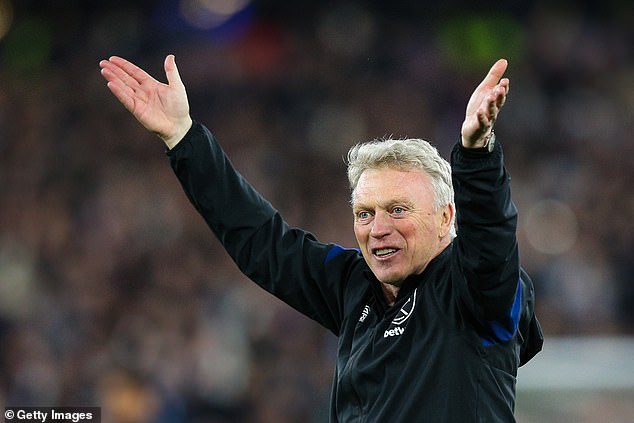 David Moyes saluted a ‘massive’ performance from West Ham after they stunned Sevilla to reach the quarter-finals of the Europa League.

Andriy Yarmolenko climbed off the bench to sink the LaLiga side as the Hammers prolonged their European adventure with a dramatic extra-time win.

West Ham, debutants in the knockout stage of the Europa League, became the first English team to beat the six-time winners in the tournament at a raucous London Stadium.

Trailing 1-0 from the first leg, Tomas Soucek headed West Ham level in the first half and, on a genuine European glory night reminiscent of Upton Park in its heyday, Yarmolenko fired the Hammers to a 2-1 aggregate victory and into a historic quarter-final.

Moyes, referencing the club’s new unofficial anthem, said: ‘Tonight we were massive, the way we played. We deserved it in the end. It was a really great night and one we really enjoyed. The story tonight was the team.

‘Are we favourites to win it? No. But we put out the team who are serial winners, so that will give us a lot of confidence. They were two tough games, really close. I think we did a really good job putting out a Spanish team.

‘We are still climbing a mountain, and we are at base camp at the moment. Who would have said two years ago we’d have a night like tonight – but I see a great chance for things to still improve.’

Czech midfielder Soucek struck six minutes before half-time to level the tie with a towering header at the far post from Michail Antonio’s cross.

And Yarmolenko, who scored an emotional goal against Aston Villa on Sunday in his first appearance since Russia invaded his homeland Ukraine, won it when Sevilla keeper Yassine Bounou pushed away a Pablo Fornals shot straight to him to finish at the far post.

Soucek said: ‘It was one of the best games I have played here, the atmosphere right from the start. For sure I will never forget this game and hopefully we can go on.

‘Sevilla was one of the hardest teams we could draw. We will watch the draw at training, but if we can beat Sevilla we can beat any of the teams.’

‘At the end of the day we go home with a feeling of sadness, for the fans and in the dressing room,’ he said.

‘We tried really hard but we couldn’t do anything at the end, unfortunately.

‘I don’t think it was a question of hunger. They managed to win the game, they played well, and we have to congratulate West Ham.’