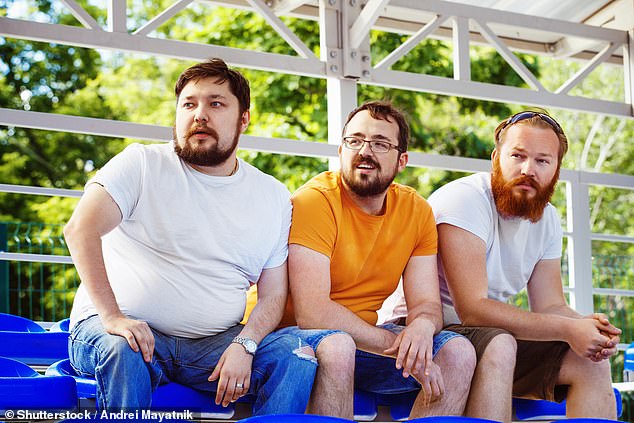 An American man admitted that he’s worried the UK has a ‘warped’ idea of healthy body size after his British colleagues called him ‘skinny’, and said he’d look better at 15st .

The man, from Tennessee, explained on Reddit that he practices yoga and walks to work to maintain his 11.5 stone, 6’2 frame, however his British colleagues believe 14-15st is normal for someone his height.

He said it’s made him wonder if Britons are getting the same ‘laughable’ idea of what makes a healthy body size as people in the States.

Many commenters were quick to agree that people don’t know what a healthy body size looks like, while others argued health can’t easily be measured by weight.

Posting on Reddit, the man explained his work colleagues think a man 6’2 should weigh between 14-15 stone, however he wouldn’t consider it healthy

The man penned a lengthy post explaining that he thinks people have a distorted idea of how a healthy body looks.

He wrote: ‘How warped is the UKs view of what is considered a healthy weight?

‘So I’m a shade under 6’ 2 and weigh 11 & 1/2 stone in the morning before breakfast. I’m in decent shape. I don’t feel small. But I’ve had some comments from work colleagues about how skinny I am. I’m originally from the states, and what people consider to be a “normal” weight in Tennessee is laughable. I’m worried this is leaking into the UK.

‘I’m not pretending that I’m some muscle bound meathead, but when I’ve asked what should be a normal weight for my height to my colleagues, they’ve responded with 14-15 stone?? Yeah, maybe if I’m a pro athlete or some genetic freak. But if you look back at photos of men even in the 80s, I don’t think 14 stone would be considered healthy. Am I way off base here?’

As the thread racked up responses, the man edited his post to add that he is vegan and has a relatively active lifestyle.

Many commenters agreed with his observation about people increasingly having a distorted view of body size.

One person wrote: ‘Over the last few decades the UK as a whole has become growingly overweight and unfit. So it is normal to be overweight. 28 per cent of UK adults are obese (BMI over 30), another 36 per cent are overweight (over 25).

‘At your height and weight, you’re a healthy weight – 14 stone is the start of the overweight category for a 6’2 man. Some people feel it appropriate to comment on other people’s weight, generally it’s none of their business but it’s often to make themselves feel better.’

Another said: ‘I’m 5’2 and 8st 5, on the pudgy side of average, utterly skinny-fat. But my coworkers are all obese and endlessly coo about how skinny I am and “Haha you could do with eating a sandwich”.

‘I’m more taken aback by the fact they think I’m skinny than the fact they make jokes. It really feels like fat is the new baseline and anything less is unusual.’

Other responses to the post were torn about how best to measure a healthy body, with one writing: ‘BMI is a load of tosh, but your height and weight put you at the lower end of the “healthy” range. ‘

Another said: ‘It’s worth looking into BMI more critically. It isn’t the gold standard people seem to think.’

A 57-year-old woman added: ‘I’m size 14 and 5ft2. I’m overweight according to my BMI. People often describe me as “slim” however, because I’m not as big as most women my age.’