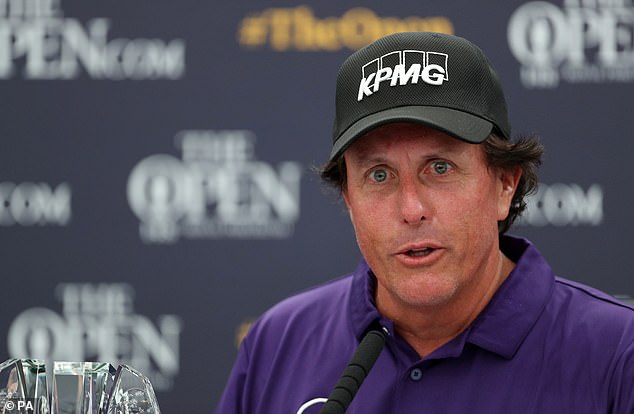 By Olly Allen For Mailonline and Reuters

Phil Mickelson, who is taking time away from the game amid the fallout from comments he made regarding the Saudi-backed Super Golf League, is no longer listed in the field of active players competing at next month’s Masters.

The Masters website on Monday showed three-times winner Mickelson listed as a past champion not playing in the April 7-10 event at Augusta National Golf Club.

Mickelson’s absence from the year’s opening major will mark the first time that he will miss the Masters since 1994.

In February, an author of an upcoming unauthorised biography on Mickelson released excerpts from the book in which the golfer called the Saudis ‘scary’ but said he was willing to look past their human rights records to gain leverage with the PGA Tour.

Six-time major champion Mickelson apologised for the comments, which he claimed were off the record, and said he planned to take time away from the sport.

The long-time fan favourite has since found himself isolated and has also lost a number of sponsors.

‘He [Mickelson] has said that he’s stepping away and he wants time for reflection – that’s something that I and we are going to respect and honour,’ Monahan said.

‘When he’s ready to come back to the PGA Tour, we’re going to have that conversation. That’s a conversation I look forward to.

‘I have not talked to Phil since he made his comments and since he said that he was stepping away. Like I said, I think the ball is in his court. I would welcome a phone call from him. But it’s hard for me to talk about the different scenarios that could play out.

‘Listen, he’s a player that’s won 45 times on the PGA Tour. He’s had a Hall of Fame career. He’s won here at The Players Championship. He’s inspired a lot of people and helped grow this Tour, his Tour.