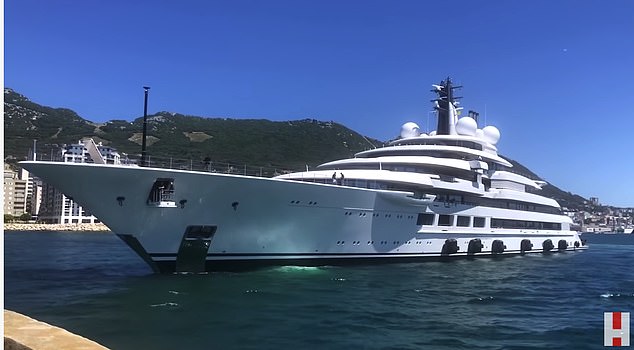 Allies of Russian dissident Alexei Navalny have shared a video of luxury assets in Europe which they claim are the property of Vladimir Putin and his family.

Chief among the alleged assets is a $700million superyacht, whose owner is not publicly listed, measuring 140-metres in length, complete with luxury features including two helipads.

The six-deck yacht ‘Scheherezade’ contains space that is the equivalent of two apartment blocks, a spa and beauty salon, and is currently moored in the port of Marina di Carrara off the west coast of Italy.

The sensational material shared on Navalny’s Youtube channel by presenters Georgy Alburov and Maria Pevchikh shows how the captain of the ship is British but rest of the crew is allegedly from the FSO and FSB – two Russian secret services.

A source said: ‘It is possible Navalny’s team has been helped by Western intelligence in uncovering this revelation.

‘The yacht has been hidden from his people, and suggests he is indeed the richest man in the world as his critics claim.’

The six-deck yacht ‘Scheherezade’ with two apartment blocks, a spa and beauty salon, is moored in the port of Marina di Carrara off the west coast of Italy

The yacht is listed as the 13th-largest in the world.

Anti-corruption campaigner Navalny, 45, is due to receive his next sentence tomorrow which may lock him away until he is almost 60.

Elsewhere in same video, the president’s ex-wife Lyudmila is alleged to be building an opulent villa in Biarritz, southwest France, a city renowned as a haven for wealthy playboys.

And his daughter Katerina Tikhonova, 35, is claimed to own a castle on the French Atlantic coast, which was recently broken into by protesters.

A castle on the French Atlantic coast is allegedly the property of Putin’s daughter Katerina Tikhonova, 35

Putin’s ex-wife Lyudmila is claimed to be building an elaborate villa in Biarritz, southwest France, according to the presenters

Fine features of a $700million yacht

The yacht ‘Scheherezade’ is estimated to have cost 75 billion rubles and its length is 140 meters – making it the 13th largest superyacht in the world.

It has six deck floors – equivalent to two apartment blocks.

Pevchikh said: ‘If a person falls under personal sanctions, like Putin, this means that any of his property found in the European Union automatically gets frozen.

‘Houses, planes, helicopters, yachts – everything must be immediately seized.’

Putin has previously blasted Russians that live in the west as ‘ready to sell their own mother’, ‘national traitors’ who want to belong to a ‘so-called upper caste’.

Although Scheherezade’s owner is not publicly listed, a numbe staffers on the ship have personal links to Putin, state the presenters.

‘Graceful is Putin’s previous yacht worth 10 billion rubles,’ they said.

‘After the purchase of Scheherazade, Graceful was re-registered to Putin’s friend Gennady Timchenko.’

In February, Graceful was spotted ‘fleeing’ from a shipyard in Germany, sparking speculation that it was trying to avoid being impounded by tough sanctions before the Russian invasion of Ukraine.

The £73.2 million pleasure craft, named Graceful, was originally built by Sevmash in Russia – with interiors and exteriors envisioned by H2 Yacht Design – was moved to Germany for modifications.

What appears to be an office room contains multitudes of shelves for books and a desk fronted with a stunning painting of a sailing boat.

Exercise equipment can also be seen out on the deck, which is also lined with lounge-style seating and barstools.