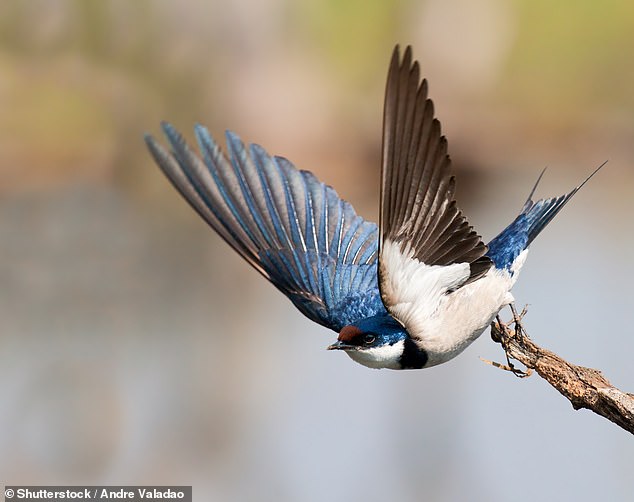 Home owners across Britain are being urged to install nest boxes and create garden habitats for insects in a bid to boost the numbers of swallows, swifts and martins across the UK.

The aim is to attract more migratory birds each summer after both swifts and house martins were recently added to the UK’s red list of threatened birds.

They have suffered a serious decline amid a significant drop in insect numbers, loss of habitat and extreme weather caused by climate change, experts say.

It is estimated that almost 60 per cent of UK swifts have disappeared over the last 25 years.

The new plea for gardeners is a part of a joint initiative by the Wildlife Trusts and the Royal Horticultural Society.

Home owners across Britain are being urged to install nest boxes and create garden habits for insects in a bid to boost the numbers of swallows (pictured), swifts and martins across the UK

Tips include making a bog garden, letting a patch of grass grow long and installing a swift box

What should people do to attract more swifts, swallows and martins?

Bog gardens provide valuable habitat for frogs, dragonflies, and a wealth of insects, as well as materials that swallows and house martins can use to build nests. Use plants like marsh-bedstraw and purple loosestrife.

Putting a swift box on an existing house, or including a swift brick in any kind of new build, will help to attract the migratory birds. Ideally, swift boxes face north/north-east to help regulate the internal temperature and are at least five metres above ground.

This provide vital habitat and food for insects and other wildlife, experts say.

In their new ‘wild about highflyers’ campaign, the charities are giving home owners tips on how to help swallows, swifts and martins, including creating a bog garden with plants such as marsh bedstraw and purple loosestrife to provide habitat for insects and nest-building material.

Just letting a patch of grass grow long provides vital habitat and food for insects, which the birds feed on, and other wildlife, the groups said.

Not only that, but householders can add a swift box to an existing house or include a swift brick – which builds nesting accommodation into walls below the eaves – in a new build property, to provide the birds with somewhere to rear their young.

Dr Rob Stoneman, director of landscape recovery at the Wildlife Trusts, said: ‘Swifts, swallows, and martins are some of our most iconic breeding birds.

‘Watching and hearing these creatures soar through the sky is an uplifting spectacle, and an experience that leaves you totally in awe of nature.

‘Sadly, these birds – like much of our wildlife – have suffered severe declines in recent decades due to habitat loss and plummeting insect numbers, which are affected by pollution, the impacts of development, and climate change.’

Wildlife campaigners are offering tips on how to help swallows, swifts (pictured) and martins, including creating a bog garden with plants such as marsh bedstraw and purple loosestrife to provide habitat for insects and nest-building material

He added: ‘With a bit of diversity and structure, a garden can become a haven for all kinds of wildlife, providing nesting sites, shelter and food.

‘It’s all about being creative, ditching all chemicals, and letting things go a bit wild.’

Helen Bostock, senior wildlife specialist at the RHS, said: ‘Anyone lucky enough to share their homes with nesting swallows, swifts or house martins will understand how magical these birds are.’

However, she warned that the birds were vulnerable, with the numbers returning each summer dropping year on year.

‘The UK’s 30 million gardeners have an important part to play in helping revive their populations – from tailoring planting choices to include insect favourites and embracing bare patches for the benefit of nest building, people can make small-scale changes that will reap big rewards,’ the wildlife expert added.

How to tell the difference between a swift, swallow and house martin

Swifts, swallows and martins often get confused for one another, but it’s easier than you might think to tell them apart, according to the RSPB.

Swifts are dark, sooty brown all over, but often look black against the sky.

The wings are long and narrow, with a tail that is slightly forked, but not as much as a swallow’s. Swifts have a piercing, screaming call, but they aren’t noisy at the nest.

Swifts nest in holes – often inside old buildings or sometimes in specially-designed swift nestboxes – so you won’t see them building a nest outside.

You’ll see swifts flying low and fast around buildings, screaming loudly or swooping fast into a little crevice in a building to their nests.

Renovations to roofs and modern building designs mean that there are fewer nest sites for swifts now.

Swifts eat airborne insects and these are also much scarcer too, in large part due to changes in farming practices.

Swallows are graceful gliders and have a distinctive long, forked tail with tail streamers.

They also have a red throat, white underside, blueish sheen to the head and back, and longer wings than martins.

Swallows dart and glide, often low to the ground or at treetop height, and tweet or chirrup from perches.

They like barns and other outbuildings with dark nooks and crannies for nesting, and will build a cup-shaped nest of mud that’s difficult for predators to spot.

House martins are smaller than swifts or swallows and have a pure white underside.

They also have blue-black upper parts, except for the white rump on their backs, a forked tail and shorter wings than swifts or swallows.

House martins are most active in mornings and evenings. They zoom around at mid-height, usually in flocks, coming down low over the water and fluttering in and out of house eaves, chirruping softly.

Wetlands are a hotspot as house martins prey on flying insects such as midges, mayflies, damselflies and dragonflies as they swoop over the water.