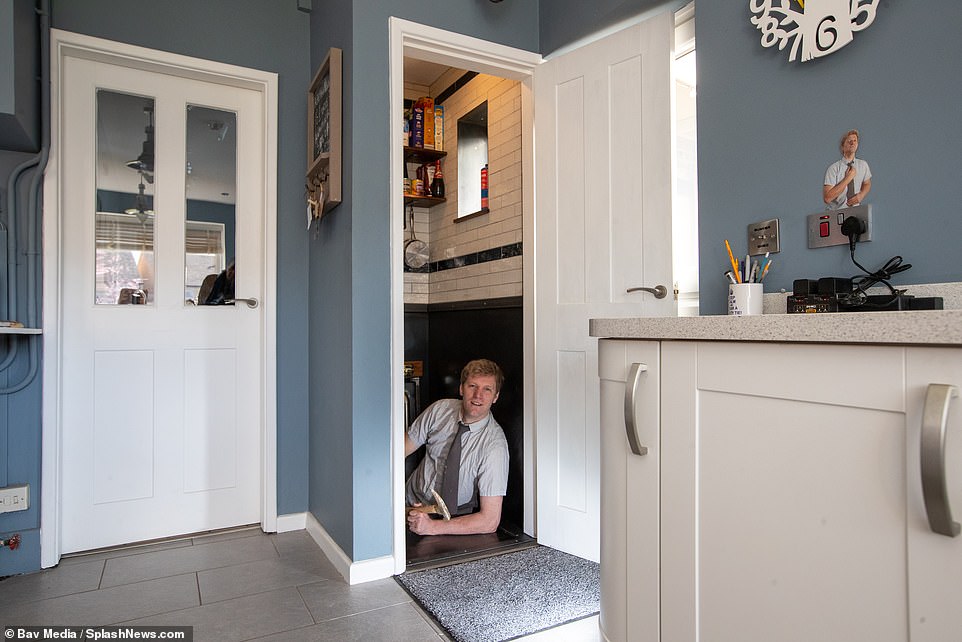 When an umbrella won’t do! Man spends two YEARS hand-digging a three metre tunnel to connect his house and garden shed because he doesn’t like getting wet in the rain

A man has spent two years hand digging an incredible three metre deep and twelve metre long tunnel under his garden to connect his shed to his house.

Inventor and YouTuber Colin Furze, from Stamford, Lincolnshire, has worked on the remarkable back-breaking project for months, removing an astonishing three-and-a-half tonnes of rubble a day.

The 42-year-old, whose digging videos have each attracted more than six million views, has now finally connected the tunnel to his house in Lincolnshire and says it one of the ‘most enjoyable’ projects he has ever done.

‘It’s been one of the most talked about projects on my channel,’ he explained.

Youtuber, Colin Furze, has completed a twelve metre long running from his house to his garden shed to help him avoid the rain

As the tunnel got longer Colin even built a small mine cart and track to help transport the rubble out of the hole. Pictured during the construction

‘It’s a very cool project, everyone likes the idea of digging tunnels.

‘I do the projects that people really want to do but don’t have the time or money to actually make happen.

‘I’m very lucky as it’s quicker to open my back door and walk to my shed, but it’s much more fun to use an underground tunnel and it means you don’t get wet if it’s raining.’

Colin started the tunnel under his shed floor in November 2018 and it took him around a year to dig down to three-and-a-half metres deep, working on it when his neighbours were out so it wasn’t too noisy.

It took Colin a whole year to dig three metres down, picture by the entrance in the shed that connects to the tunnel

He used a shovel and a bucket with a pulley system to hoist the rubble out of the hole as it got deeper.

He re-started the tunnel in March last year, using hydraulics to dig sideways through the earth and rock and aided by his mates Rick Simpson and Tom Lamb.

As the tunnel got longer Colin even built a small mine cart and track to help transport the rubble out of the hole.

‘We had to dig the whole thing by hand as the tunnel goes underneath the foundations of my shed, garage and house,’ said Colin.

Colin Furze’s house with the kitchen on the left and the shed on the right,with the tunnel going under the buildings

‘It was very hard work but also one of the most enjoyable things I have ever done.

‘We wanted to keep the noise down for my neighbours so used a shovel and hydraulics, which were really quiet.’

The tunnel, which is 1.2 metres wide and two metres high and comes up in a cupboard in Colin’s kitchen, has been reinforced with steel and concrete.

Colin, who is renowned for his inventions, including the world’s fastest mobility scooter and a drivable hot tub car, added: ‘It’s very spacious in the tunnel, everyone who visits wants to try it out.’