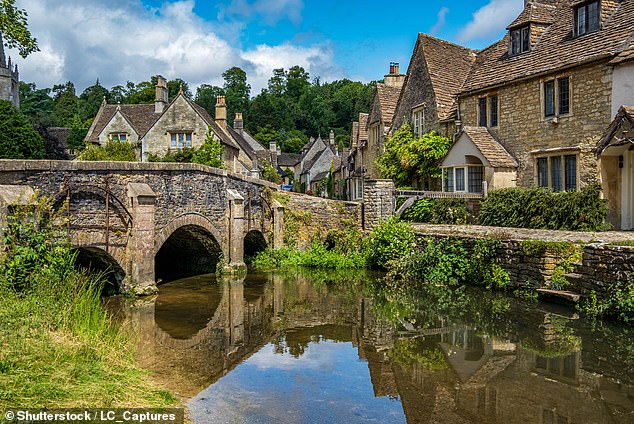 ‘Little to offer besides a steep walk downhill’: US tourists baffled by quaint Cotswolds village Castle Combe slam the ‘pub for being the only activity’ and complain there’s no actual castle in VERY scathing TripAdvisor reviews

It’s been named Britain’s prettiest village and has been the backdrop to numerous Hollywood films and TV shows, but even that is not enough to impress some visitors from across the Atlantic.

Famed for its quintessentially British cottages and scenic rolling hills, the Cotswolds is the chic weekend retreat of choice for celebrities such as Kate Moss, the Beckhams and Jeremy Clarkson, but some visitors from the US were left feeling dismayed after finding the village of Castle Combe ‘dull’.

One visitor from Alabama, wrote on TripAdvisor that they had expected more hustle and bustle from the quiet country village, while one complained that it was ‘a bit tiring’ to walk around because it was a warm day.

Another visitor, from Nevada, who never actually made it to the village, complained that there was no fun on offer and resolved to wait to visit the real Cotswolds – unaware they were already in the area.

They said: ‘We were going to walk the town but after we saw what little it had to offer besides a steep walk down the hill to get there and the return, we decided we would pass and wait for the Cotswolds.’

Castle Combe, which has been previously voted the prettiest place in the UK, is regarded as the jewel in the Cotswolds’ crown, a feat that’s not to be snubbed considering the five counties that are included in the 800 square miles.

The quintessentially English village has been used by Hollywood film directors including Steven Spielberg, who shot scenes for War Horse there.

It’s distinguised by 15th-century stone cottages, a Grade I listed 13th-century church and stone-canopied market cross and was also the backdrop to films such as Stardust, The Wolfman, Dick Turpin and 1967’s Dr Dolittle – and TV shows Poirot and Robin of Sherwood.

However, it seems that some visitors to the area were expecting something more than a stroll around a pretty town.

Complaining about the lack of activity, a visitor from Alabama wrote: ‘After a long walk from the car park up on a hill on a Wednesday afternoon, the village appeared to be closed.

‘The short section of main street that was shown in War Horse is very attractive, but is that all there is?

‘We entered the Tea Room and waited for 10 minutes while the owner spoke on the phone with someone.

‘Then she told us to order a full English tea or nothing – so we left. The one pub that was open seemed to have the only the town’s activity.

‘Castle Combe was a big disappointment – then we had to walk back up the hill to the car park.’

A third tourist, from Texas, felt duped by the villages name writing: ‘There is NO CASTLE in Castle Combe!’

They added: ‘No castle but there are remains of a castle, but you won’t see it. It is overgrown and on private property.’

Lack of parking was a frequent complaint, with one visitor from California complaining that it was too far away from the village, while another said they were unable to park because there was a festival on and advised visitors to ‘go elsehwere’.