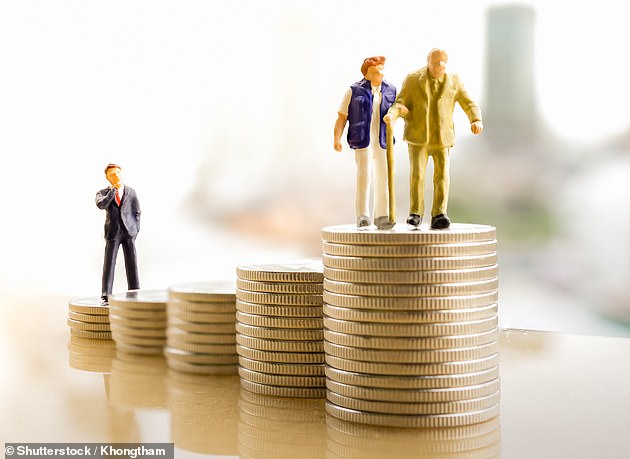 Why you shouldn’t bank on your basic workplace pension to provide the retirement you want: Savers warned they need to pay in more

By Tilly Armstrong For The Daily Mail

Millions of workers are mistakenly relying on auto-enrolment pensions to provide the retirement they want, industry research reveals.

It’s ten years since the introduction of auto-enrolment rules that require both employees and employers to pay into a pension.

The minimum contribution is 8 per cent of earnings, with employees paying in 5 per cent (including 1 per cent tax relief) and employers paying 3 per cent.

The minimum contribution to a workplace pension is currently 8% of earnings, with employees paying in 5% (including 1% tax relief) and employers paying 3%

But new research from B&CE, provider of workplace scheme The People’s Pension, found that around 7.4 million pension savers make the minimum employee contribution required by law, and just 7 per cent understood that this would fund only a basic retirement.

The industry says even with a state pension of £9,339, that would leave them unable to afford to run a car and limited cash to spend on leisure, food and drink.

Most workers think that because the rates are set by Government they will be left with enough savings, the research found.

The pension industry has produced a guide to the cost of certain retirement lifestyles. Designed by The Pension and Lifetime Savings Association (PLSA), these are pitched to three levels.

How to top up your work pension

A simple (and potentially cheap) option is to top up your pension fund – find out how here.

A ‘comfortable’ retirement requires an annual income of £33,600, and allows more financial freedom and some luxuries such as three weeks’ holiday in Europe.

A ‘minimum’ retirement lifestyle requires £10,900 a year. This would mean travelling by public transport, and only a week and a long weekend of holiday in the UK.

Phil Brown, director of policy at B&CE, called on the Government to set out plans for a review of the minimum level of auto-enrolment contributions.

He says: ‘Millions of hard-working people are not saving enough.

‘Affordability plays a role, but in most cases, people believe that because they’re saving what they’ve been told to by those who run the country, they’re saving enough.’

Former pensions minister Baroness Ros Altmann says auto-enrolment has been a ‘fantastic success’. She adds: ‘It’s paved the way for lots of people to start saving in a pension who otherwise would probably not have done so.’