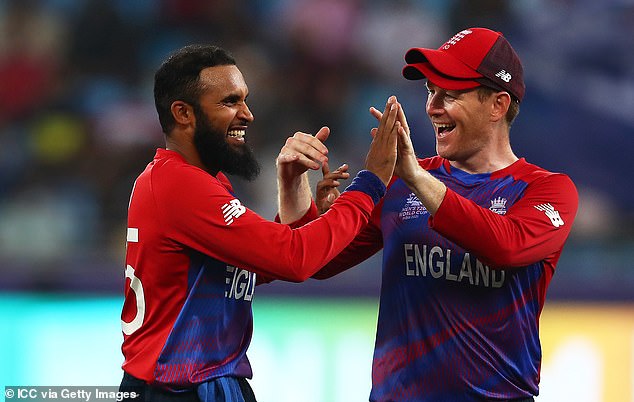 By Richard Gibson for the Daily Mail

Adil Rashid will continue to prioritise becoming a double world champion over a return to first-class cricket with Yorkshire this season.

Rashid was asked to reconsider his white-ball only status by the new regime at Headingley and mentored the club’s youngsters on a pre-season tour of the UAE but has made the Twenty20 World Cup his main goal in what promises to be a busy 2022.

The 34-year-old, who surpassed Chris Jordan as England’s leading wicket taker in 20-over cricket in January, will be at the forefront of this autumn’s bid to add a second World Cup title to the 50-over version Eoin Morgan’s team claimed on home soil three years ago.

It was his excellent relationship with new Yorkshire coach Ottis Gibson – he was aged just 13 when Gibson first coached him – that opened the possibility of him ending his longstanding four-day exile.

But Rashid is understood to have taken into account his relatively recent injury issues – a shoulder problem required two cortisone injections during England’s victorious cup campaign of 2019, and months of rehab thereafter – plus the heavy international schedule next winter in his decision to begin his 2022 campaign with Yorkshire’s opening Vitality Blast fixture versus Worcestershire on May 25.

England are scheduled to play one-day and Twenty20 series in Pakistan either side of the World Cup in Australia, which starts in October, while there are also tours to Bangladesh and South Africa on the cards.

Rashid has not made a first-class appearance since his most recent Test in 2019 and last featured for Yorkshire in a Championship fixture five years ago.

Such is his quality, however, that a return next month would have seen him contend for a Test recall.

Although Yorkshire respect his current position, they intend to keep dialogue open on the subject in the hope he returns in future.

The 204-cap England leg-spinner was a spectator in his home city of Bradford on Thursday as Yorkshire began an intra-squad practice match as part of their pre-season programme.

Surprisingly, given his recent performances on the global stage, he was overlooked for the Indian Premier League, which begins this weekend, but could still be recruited as a replacement in the event of injuries among the 10 franchises.