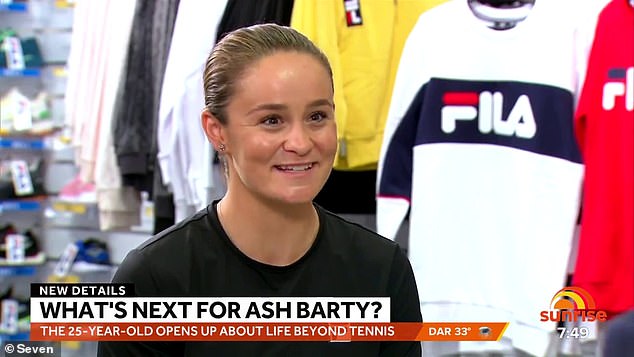 Ash Barty dropped a clue that she would shock the world by announcing her retirement from tennis when she gave Channel Seven a one-on-one interview shortly before quitting the sport.

The world No.1 sat down with Sunrise’s Mark Beretta and discussed her plans for 2022, revealing she sits down every December 31 and writes down a list of goals and dreams she hopes to achieve in the coming year.

‘We’ve ticked a couple of those (goals) off, but I promise you there are still a few on there that we’re chasing,’ she told Beretta, who asked her what the remaining targets were.

‘I won’t tell you that – that’ll ruin the surprise!’ Barty laughed.

That surprise sent Australia and tennis fans across the world into shock when it became public on Thursday, with Barty becoming emotional as she announced her decision in a video interview.

The reigning Australian Open champion said she took the decision so she could ‘chase her dreams’, adding that she was ‘so happy and so ready’ to stop competing on the world tour.

Barty became emotional when she revealed her shock decision to the world on Thursday, revealing she is leaving the tour behind to chase her dreams

Winning Wimbledon in 2021 was a turning point for Barty. She called the victory the ‘one, true dream I wanted in tennis’

She followed that milestone by taking out the Australian Open title just a few months later, becoming the first Aussie woman to do so in 44 years

‘I know I’ve done this before but in a very different feeling and I’m so grateful of what tennis has given me, all of my dreams plus more but I know the time is right now for me to step away and to put the rackets down,’ she said.

Barty earned US$23.8 million (AU$37.75 million) in prize money and millions more in sponsorships, making her the 14th best-paid female player in history.

She made US$3 million from endorsements last year and was the eighth-highest paid female athlete in 2021, pocketing US$6.9 million, according to Forbes.

Her total career earnings are estimated to be around the US$53 million-mark (AU$70 million).

Barty (pictured with fiance Garry Kissick) became a multi-millionaire through tennis, giving her the freedom to chase her lifelong goals in retirement

Barty said she was considering retirement for a while and had a ‘gut feeling’ achieving her childhood dream of winning Wimbledon last year.

‘It’s something I’ve been thinking about for a long time and I’ve had a lot of incredible moments in my career that have been pivotal moments,’ she said.

‘And Wimbledon last year changed a lot for me as a person and for me as an athlete when you work so hard, your whole life for one goal, and I’ve been able to share that with so many incredible people.

‘But to be able to win Wimbledon, which was my dream — the one, true dream I wanted in tennis — that really changed my perspective. I just had that gut feeling after Wimbledon and had spoken to my team quite a lot about it.

‘There was just a little part of me that wasn’t quite satisfied, wasn’t quite fulfilled. And then came the challenge of the Australian Open.