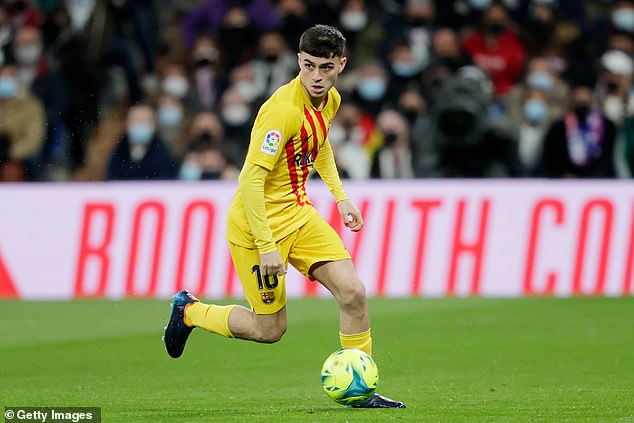 ‘They told me that I didn’t have the level to be there’: Barcelona wonderkid Pedri reveals he went on trial with arch rivals Real Madrid during the early days of his career – but wonderkid was rejected for not being good enough

Barcelona wonderkid Pedri has revealed he went on trial with arch rivals Real Madrid in the early days of his career, but was told that he was not good enough.

Tricky midfielder Pedri, 19, has burst onto the scene at the Nou Camp and been tipped to help boss Xavi and his new-look team herald in a new era for the club.

However, it has now surfaced that his career could have taken a very different path had Madrid opted to sign him up after his brief period training with them.

‘I went there [to Real Madrid] and the first few days I couldn’t train because there was snow on the pitches,’ Pedri told El Partidazo de COPE.

‘I trained three days. One I think they were playing, and they took me down with the B team to train. In the end they told me that I didn’t have the level to be there and that they were going to leave me to keep looking.

‘At first, you don’t like being rejected anywhere, but then it motivates you to think that if they didn’t want you, now you’re going to work hard so that something else can come in the future.

Boss Xavi handed Pedri a start in El Clasico, with the midfielder tipped for a very bright future

‘I have never met the person who said no to me. I don’t remember who he is. I would tell him that now I am enjoying myself at Barcelona.’

Pedri has made 18 appearances in all competitions across a season severely derailed after a hamstring injury forced him to the sidelines for several months.

So far this campaign, he has scored three goals and picked up an assist.

Pedri spent three days training at Madrid, but insists he is where he wants to be, at Barcelona

Memorably, he started in his side’s thumping El Clasico victory against Real Madrid last weekend, and believes their celebrations at full-time were not over the top.

He added: ‘When you win 4-0 against your arch-rivals, you are going to celebrate it like this because you get immense joy.

‘It was an unforgettable match, but now we are in the [Spanish] national team and we are all a team. Here we look the same and laugh the same way.

‘We don’t hesitate with that. We are a team and we want to win together.’