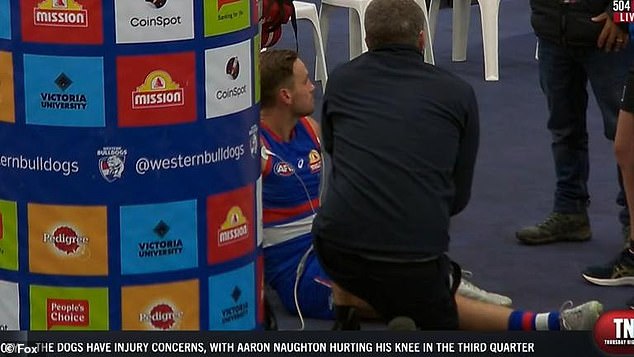 The Western Bulldogs are continuing to look into a scary incident involving Hayden Crozier after the defender unexpectedly fainted at halftime during Thursday night’s loss to Carlton.

Crozier was kept in the locker room, hooked up to a heart monitor and reportedly given oxygen by medics for the duration of the main break.

Bailey Williams was substituted in to play the third quarter in his place.

Crozier is hooker up to oxygen and a heart monitor in the sheds after fainting at halftime during the Bulldogs loss to Carlton on Thursday night.

The Bulldogs will continue to monitor the situation but coach Luke Beveridge is optimistic there was nothing too serious in the incident.

‘So yeah, we’re all concerned about him. Our medical staff think he’s okay. Not sure about the reason why, but he just got light-headed and fainted.

‘Obviously straightaway you make sure that he’s looked after and I think he was in good hands.

‘I’m not sure (if he’ll go to hospital). They’re monitoring him but he seems to be fine at the moment so hopefully it’s nothing more than some lightheadedness for some reason.’

Dylan Roberton fainted during an AFL game in 2018. He was later ruled to have an ongoing heart condition which forced him into an early retirement.

The scary incident was reminiscent of the 2018 match between St Kilda and Geelong in which Saints defender Dylan Roberton fell to the ground with no players within 10 metres of him, prompting teammates to rush to his aid before trainers assisted him from the ground.

He was later found to have an irregular heartbeat and announced his retirement from the AFL in March 2021 to focus on his wellbeing.

‘Football has been a huge part of my life for such a long time and I’ve never lost my passion for the game. But after lengthy discussions with my family and on the advice of my doctors, I’ve made the extremely hard decision to hang up the boots,’ he said at the time.

Crozier celebrates a goal prior to the incident that saw him mysteriously faint at halftime. He will be monitored and the incident investigated by medical professionals

Beveridge oversaw the 2016 match in which Mitch Wallis and Jack Redpath both sustained gruesome injuries that he described as ‘tragic’.

He felt Crozier’s incident did not have the same effect on his team.

‘We have had situations historically … the main game was when Mitch Wallis broke his tibia and fibula and Jack Redpath did an ACL in the same game. That did have an impact, but that’s the only time I can remember. I’m pretty sure tonight, the boys kept it together.’