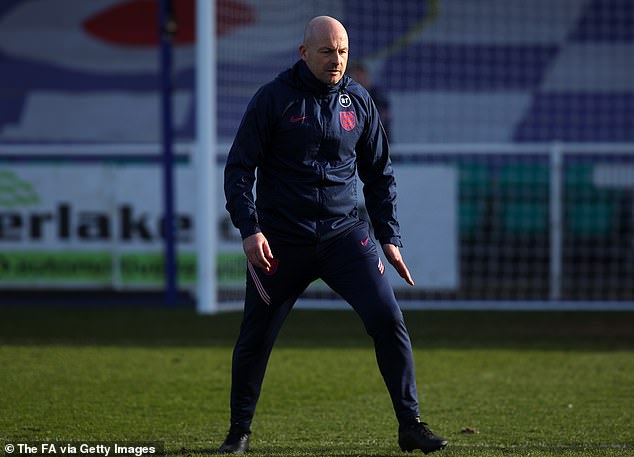 Lee Carsley expects England’s Under 21s to challenge for next year’s European Championship title despite losing an increasing number of talents to the senior team.

Captain Marc Guehi is the latest to receive recognition with Gareth Southgate’s side and the prospect of Crystal Palace’s centre-half dropping back down in future camps is deemed unlikely.

Conor Gallagher and Emile Smith Rowe have also received call-ups recently but Carsley yesterday insisted that the Young Lions have it no harder than any of their major rivals across the continent.

‘We’ve got to provide players for the senior team, which is really important,’ Carsley said.

‘But we’ve got some good players here [now] and we should be competing, we should be in the finals pushing other nations.

‘Everyone is in the same position – a lot of other countries push players up early like we do. Making sure the seniors always take priority is what the job is all about. To go with that we have to perform with style and win.

Under 21s captain Marc Guehi, left, is the latest to receive an England call-up

‘We’ve got enough talent within the pathway that if we pick the right squads, we will have success and [also] develop players for the seniors.’

England still have work to do if they are to reach Euro 2023, three points behind qualification group leaders Czech Republic with two games in hand ahead of tonight’s game against minnows Andorra.

Taylor Harwood-Bellis is given the captain’s armband in Guehi’s absence. ‘Everyone is made up for Marc, Conor and the other lads who have gone up,’ Harwood-Bellis said.

‘Obviously we want them to be in our team because they are top players and top lads. But if they’re going up to play in the seniors, everyone is made up for them.’