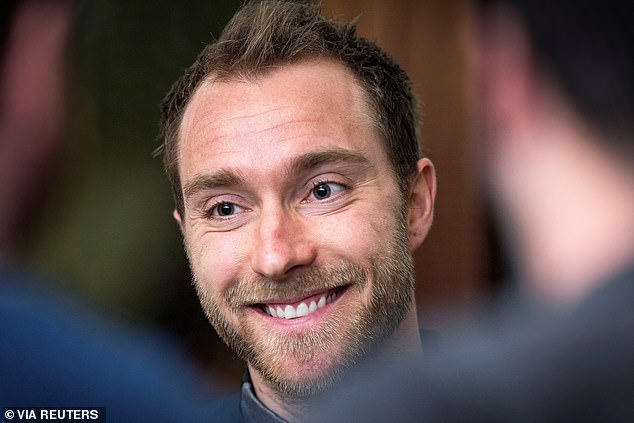 Christian Eriksen takes part in Denmark training for the first time since his shock cardiac arrest at Euro 2020, as the Brentford star insists he is ‘trusting the doctors’ ahead of his sensational comeback

Christian Eriksen has taken part in training with Denmark for the first time since his horrifying cardiac arrest at Euro 2020 as he prepares for an incredible comeback with his national team.

The world was stunned when the playmaker dropped to turf in Denmark’s opening gmae of the tournament against Finland, but was quickly brought back to life thanks to the efforts of the medical teams in the stadium – with players, fans and Eriksen’s loved ones all initially fearing the worst.

It was thought Eriksen may never play football again after the incident, but after undergoing extensive tests on his heart, he was fitted with an ICD – a heart starting device – and later given confidence he could return to the game.

The device meant that Inter Milan were forced to release him due to strict rules forbidding players with heart conditions in elite sport, but Brentford opted to give him a chance despite uncertainty over his fitness.

Now Denmark have recalled him to the squad and he was seen greeting his international team-mates after linking up with them on Wednesday – embracing and catching up at their team hotel.

And on Thursday Eriksen was put through his paces in training as boss Kasper Hjulmand prepares for upcoming games against Holland and Serbia.

Eriksen spoke about his decision to return to football and said he was confident he would not suffer any further problems with his heart – adding he was place his trust in the doctors.

‘I ended up trusting the doctors,’ he told Sky Sports. ‘I wouldn’t stand here today if I wasn’t able and capable of coming back without any bad things happening to me.

Denmark boss Kasper Hjulmand admitted he will assess how the former Tottenham Hotspur star gets through training before deciding whether to play him in the fixture.

‘We just have to look at what exactly he has done at Brentford, where he started training again on Sunday,’ Hjulmand said Wednesday.

‘Before that, he had missed the workouts for four days. We have to see how much he has done when we get the latest data.’

While Hjulmand admitted he will most likely start on the bench against Holland, he confirmed the 30-year-old would be ‘100 per cent’ ready to play Serbia at Parken in Copenhagen on Tuesday – the same venue where he suffered his cardiac arrest.