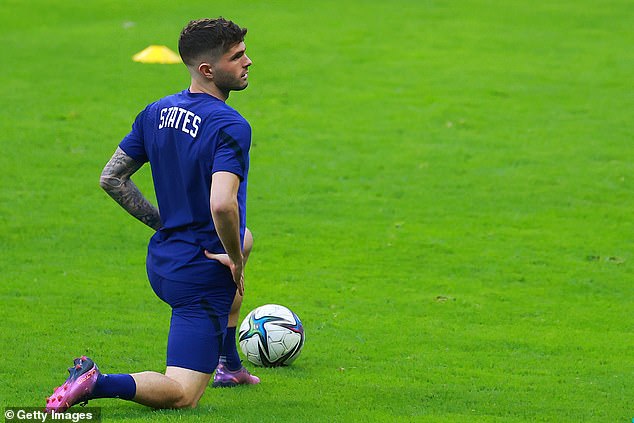 ‘It’s been a crazy situation’: Christian Pulisic opens up on the chaos at Chelsea with the club up for sale after Roman Abramovich was sanctioned following Russian invasion of Ukraine

By Joe Ridge for MailOnline

Chelsea winger Christian Pulisic has described the crisis engulfing the Stamford Bridge club as ‘crazy’ as he enjoys a welcome international break with the USA team.

Blues owner Roman Abramovich has been forced to put the club up for sale after having his assets frozen by the Government amid his links to Vladimir Putin following the Russian president’s decision to invade Ukraine.

Chelsea have not been able to sell tickets to matches, while spend on away travel has been limited as the club look to quickly find a new owner.

Amid the chaos, however, Thomas Tuchel’s side have won six matches in a row, and Pulisic, 23, praised his side’s ability to focus on football.

‘It’s been a crazy situation, to be honest, but we’ve been able to focus on our game and just worry about playing over there,’ said Pulisic.

The former Borussia Dortmund man is preparing for upcoming World Cup qualifiers against Panama and Costa Rica, knowing that by avoiding defeat they will reach the finals in Qatar later this year.

And Pulisic spoke of his excitement at linking up with his international team-mates. ‘I’m just excited in general to come play with the US national team because I love this group of guys and I love this team and it’ll be nice to have a break, see something a bit different, and then I’ll be ready to go back and finish off the season strong,’ he said.

‘Everyone was questioning that I’m not playing and this and that, and I was doing fine then and I’m doing fine now. That’s the beauty of this sport and this profession, and I’m feeling very good and I feel in a good rhythm at the moment. I’m really happy to now be back with the national team to really try to help the team.’