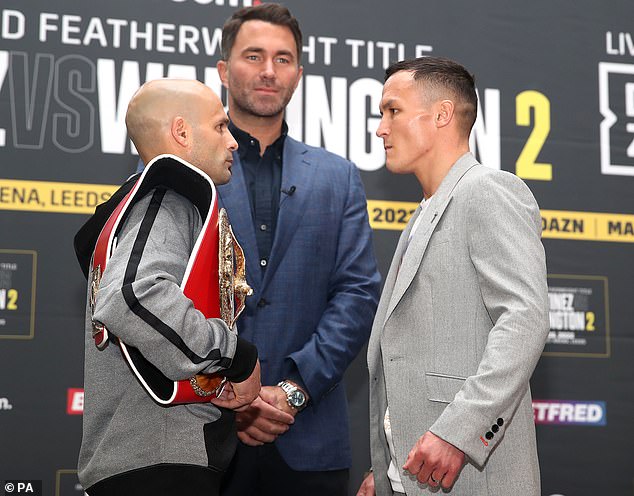 ‘My book has gone from being in the bargain aisle of ASDA to f****** best seller!’: Josh Warrington is ready to seal another remarkable chapter in his storied career by toppling Kiko Martinez… but isn’t contemplating retirement if it doesn’t go to plan

Josh Warrington insists he is ready to seal another remarkable chapter in his storied career by toppling Kiko Martinez for a second time this weekend.

Warrington is set to collide with Martinez at Leeds’ First Direct Arena on Saturday night five years after they last met at the very same venue.

It was the Leeds man who prevailed on that night in 2017, yet Martinez heads into their rematch as the A-side fighter after knocking out Kid Galahad to become IBF featherweight champion in November.

Warrington, who suffered his first professional defeat against Mexico’s Mauricio Laura in February 2021 before a cut ended their rematch prematurely seven months later, is in desperate need of a victory with his career hanging in the balance.

And should he prevail against Martinez to bring his story back full circle, the 31-year-old expects his future autobiography to fly off the shelves.

He joked at Friday’s pre-fight press conference: ‘I tell you what, my book has gone from potentially being in the bargain aisle of ASDA to f****** best seller. What a chapter that is!

‘It’s all in my hands isn’t it? I’ve got to do the business, and it’s funny how this sport works, but I’m gonna make sure that my stars have aligned for a reason and go out there on Saturday night and do what I’ve done all camp.

Despite heading into it on the back of a technical draw and knockout defeat, Warrington is not letting the dreaded thought of ‘win or retire’ creep into his psyche before Saturday’s contest.

‘I haven’t even really thought about [retiring] to be honest with you,’ he insisted. ‘You mentioned it last time in the first presser, but I ain’t letting that enter my head. I’m only focused on winning.

‘I know Kiko has mentioned it himself about win or retire, putting himself under that pressure, and I just focus on winning and having my arm raised.

‘That’s how I see myself in that arena, a long time since I’ve been there, having that arm raised – and the new!’

Martinez, meanwhile, is determined to prove his stunning knockout of Galahad last year was no fluke.

‘I’m really confident, because as I said last time, I was going to become world champion, and I did it,’ the Spaniard said.

‘Maybe he’s too confident and he does not understand that he’s facing Kiko Martinez.’

Sign up here to watch Sunday’s fight exclusively on DAZN