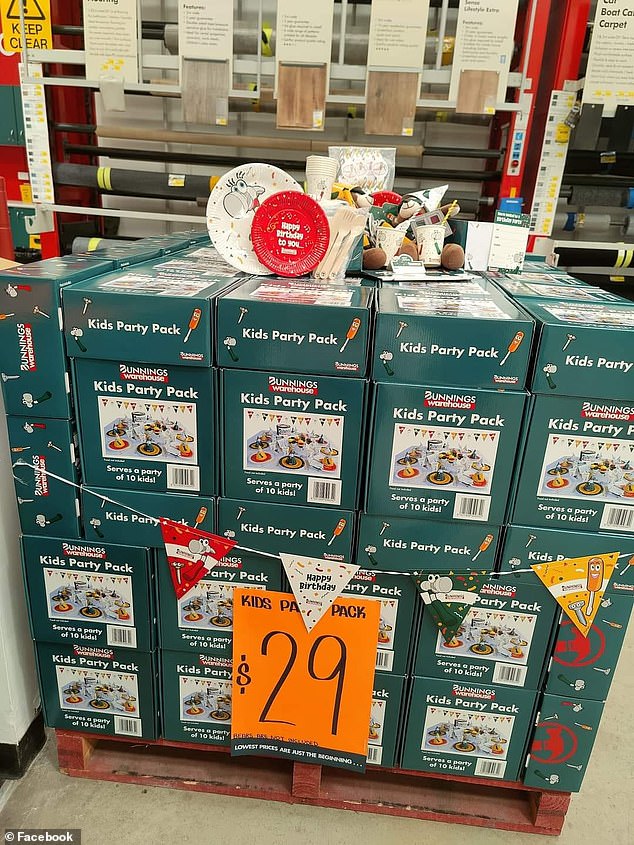 In recent years parents have organised Bunnings-themed birthday parties for their children, and now the hardware store has launched its own party pack due to popular demand.

The affordable $29 pack is filled with 135 party essentials catered for ten guests – including invitations, cupcake wrappers, name cards, plates, cups, bunting and a decorative box that can be used as a cake stand.

The DIY pack has been designed so customers can host the ultimate Bunnings party in their backyard.

Shoppers are enticed to act quickly because the Bunnings Kids Party Packs will only be available while stocks lasts.

Due to trading restrictions in Western Australia, the Party Packs will only be available in Armadale, Broome and Bunbury stores.

She said Carter was excited to hear about the new kids party packs that he and other Bunnings fans helped inspire.

‘When Carter saw the packs, he thought they were ‘soooooo cool’ and loved the hammer characters and birthday badge,’ Kylie said.

‘He thinks lots of kids are going to have the best Bunnings parties this year!’

One mum who spotted the party packs in store quickly shared the news on the Party Mums Australia Facebook group.

‘I saw this on one of the Bunnings pages today that might be helpful to those having a Bunnings party,’ mum Kimi wrote and shared a photo.

Hundreds commented and said the packs would be great for kids and adults alike.

‘I think I should have an Bunnings birthday for me cause I looooove Bunnings,’ one person wrote.

‘Waitttttt I’m totally going to get that for my partner’s birthday. He’s always at Bunnings,’ another added.