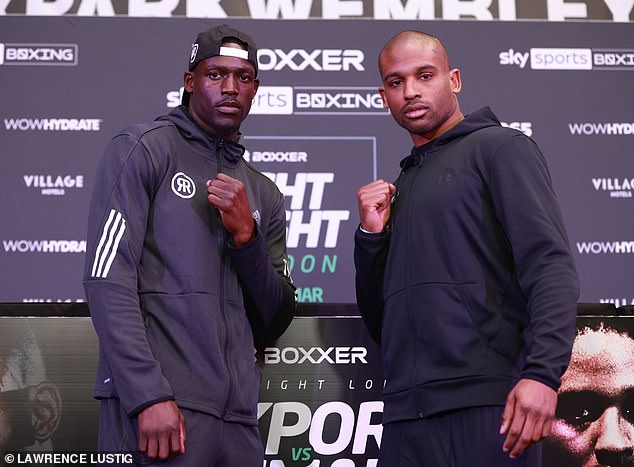 Richard Riakporhe has warned Deion Jumah that he will serve only as another stepping stone en route the cruiserweight world title.

The unbeaten pair meet in an all-British battle at Wembley Arena on Saturday night atop a bill that also features exciting prospects Caroline Dubois and Adam Azim.

Riakporhe – the WBC’s mandatory challenger – was due to face ex-European champion Fabio Turchi this weekend, while Jumah was slated to fight Mikael Lawal. But after both opponents pulled out with injury, promoter Ben Shalom turned two fights into one.

There are no belts on the line but Riakporhe holds no fear of slipping on this potential banana skin.

‘It’s my time… now we’re back on the midnight train, we’re moving swiftly. My next opponent is just another opponent I need to deal with.’

Riakporhe added: ‘I don’t think he’s conditioned to absorb the punishment I’m going to dish out.’

The 32-year-old, who is unbeaten in 13 professional fights and trains alongside Anthony Joshua, took aim at Jumah’s sparse record of 14 fights in nine years as a pro.

‘It makes you wonder what’s going on with him?. He calls himself the ghost. He has been the ghost.’

Jumah responded: ‘This is a big opportunity… we’re ready to do a good job on Saturday.’

The London fighter, who boats a perfect record, added: ‘Richard was one of the fighters I’ve had in my mind for a number of years… the time is now.’

At light heavyweight, Dan Azeez will seek revenge against Matthew Tinker – who gave him a ‘pasting’ during their amateur days.

It is another battle of unbeaten fighters.

‘I’m looking to put on another destructive performance,’ Azeez said.

‘I remember how I felt in the ring after (that defeat)… I want to set the record straight.’

Earlier in the night, both Azim and Dubois will bid to continue their unbeaten start to the professional game.

Dubois takes on Martina Horgasz in her second fight since turning over, while 20-year-old Azim takes a huge step up against Connor Marsden.